The Guild: The Official Companion Review 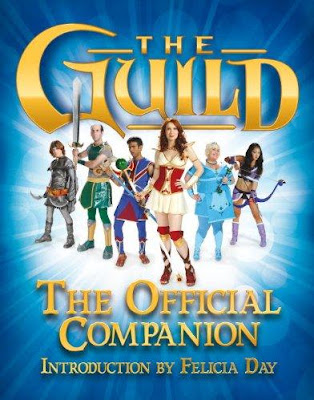 Since launching in 2007, the comedy web series The Guild has become an Internet phenomenon, with over 150 million views. Created, written by and starring Felicia Day, it follows the story of a Guild of online gamers who finally meet in real life. Here at last is the official companion to the show that fans have been waiting for, featuring an intro from Felicia, in-depth interviews and scores of photos.

Josh Whedon commented, "Her mind works faster than mine ever will and her mouth works faster than that. Felicia's career will go where she decides it will. Plus, she'll probably rule Asia and invent a new color. I fear her."

I have to admit that before I read this book, I wasn't all that familiar with 'The Guild' but after I'd read it, I became a fan.

There is a bit of everything in this book.  Photographs,  behind the scenes information, in depth interviews and so many different stories behind the making of the series itself that you can't help but get swept up in it all.  It honestly looks as if they have had the time of their life making the show and that's evident in the writing here.  The interviews are funny, informative and very heartfelt.

If you have never seen the show or maybe if you have even never heard of it before, don't let it put you off of buying this book.  However, if you are a fan of the show or of the superb Felicia Day then you are most definitely in for a treat.  There is so much here that you can sink your teeth in to that there is a very big chance that you can read this book more than once and still find new things.

Posted by Pat Scattergood at 13:02