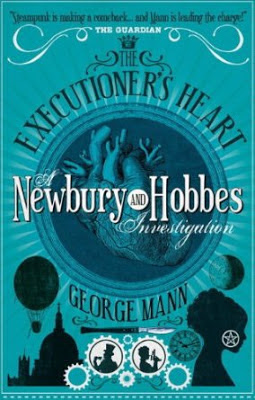 A serial killer is loose on the streets of London, murdering apparently random members of the gentry with violent abandon.

The corpses are each found with their chest cavities cracked open and their hearts removed. Charles Bainbridge, Chief Inspector of Scotland Yard, suspects an occult significance to the crimes and brings Newbury and Veronica in to investigate.

As a big fan of the 'Newbury and Hobbes' mysteries, I was massively looking forward to this one and I wasn't disappointed.

The intrepid duo are a great creation not only in the steampunk world but also in the world of the mystery novels that I love so much.  While the story does have a lot of steampunk elements, I think it would be unfair to just classify it as just a steampunk book.  It's much more than that.  What we have is a fast paced yet character driven mystery with some supernatural themes running through.

One of George Mann's strengths has always been his incredibly strong and well rounded characters.  The best of these in this installment of the series is by far the villain.  Evil, brutal and cold blooded, the villain of the story is not only evil to the extreme, leading to some truly shocking moments, there is also a truly tragic back story to the character.  That, for me, made the character in to a villain that absolutely gripped my attention with an iron grip.

The rest of the characters here are all present and correct, along with some massively shocking moments in the book that happen to them all.  There are also a myriad of revelations as well that really kept me guessing all through the book.  There were so many points in the story where you didn't know just whom was on who's side.  That's where George Mann's brilliant grasp of pacing really  came in to it's own.  Some mystery writers  tend to dump all the twists and revelations in one or two goes but that's not the case here.  Mann seems to always be able to choose just the right moment to let fly.

Even if you're not a fan of steampunk novels, this is definitely one that is more than worth picking up.  Fast paced, loads of character development and tons of shocking twists and turns, there's plenty of excitement here to grip even the most ardent of readers.

Posted by Pat Scattergood at 14:22