The Cabin in the Woods DVD Review 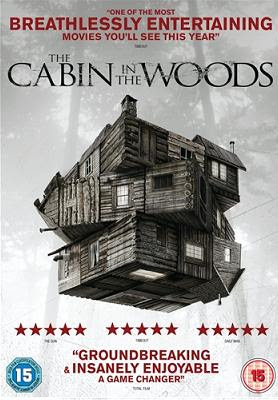 Five friends go to a remote cabin in the woods. Bad things happen.

If you think you know this story, think again. From fan favourites Joss Whedon and Drew Goddard comes The Cabin In The Woods, a mind blowing horror film that turns the genre inside out.

Produced by Whedon and directed by Goddard from a script by both, the film stars Kristen Connolly, Chris Hemsworth, Anna Hutchison, Fran Kranz, Jesse Williams, Richard Jenkins and Bradley Whitford.

I'm a massive Joss Whedon fan.  Put his name on a television series or movie and I am there to watch it.  Yet for some reason, something made me hesitant to catch this one at the cinema when it came out.  I'm not sure what it was but something about it gave me the 'watch it later' syndrome that you sometimes get with movies.

Now I've finally seen it, I'm really not sure how to write about it without giving away loads of spoilers and anyone who knows me knows just how much I hate spoilers.

Basically, and using as few giveaways as I possibly can, a group of youngsters leave to go to a cabin in the woods, although you probably guessed that much from the title.  When there, strange stuff starts happening and in true horror movie style, they all start dying one by one.

So far so cliched right?  Wrong.  This is Joss Whedon country here, although let's not forgot Drew Goddard too because the pair  of them obviously work very well together  if this movie is anything to go by.

There are a ton of twists and turns, massively gore filled and quite inventive deaths for the gore hounds out there and with most Whedon vehicles, some incisive and cynical looks at life and in this case death.  A few critics said that this movie was basically kicking the hell out of the horror genre but I personally disagree.  It came across as a homage for all those cheesy, late night, blood soaked movies that we would all stay up and watch when we thought our parents were asleep.

I loved how they had some of the deaths be quite inventive and others look like something that wouldn't have looked out of place in the classics of the genre.  One of the other things that I really liked were the nods to other horror movies too such as 'Evil Dead' and 'Hellraiser' and if you are quick witted, you will even see a 'Reaver' from the Joss Whedon television series  'Firefly' as well.

With so many knowing nods and prods to the audience, you'd expect to get tired of it really quickly but you don't.  In much the same way as in 'Firefly' and 'Buffy the Vampire Slayer' these nods and prods make you feel like you are actually in on it all, that you are quite involved in the action on the screen.

There are also some moments of quite dark yet very funny humor as well.  A bit like the humor in the 'Avengers Assemble' movie, albeit a little bit more cynical.  I have to admit that I really loved like a dumbass hyena at some of them.  Maybe that means that I'm a little twisted in the head but hey, a laugh is a laugh no matter where you get it right?

All in all, this isn't a groundbreaking movie like some of the hype filled reviews made it out to be.  What it is however is a very well made, well written and very fun movie that is an absolute blast to watch so considering just how cheap it is on Blu-Ray and DVD at the moment, you don't really have an excuse to not buy it do you?