Superman vs. The Elite Review 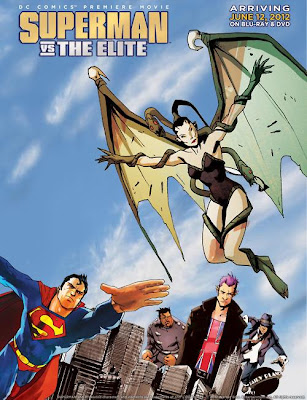 Written By Joe Kelly Based on His Story 'What's So Funny About Truth, Justice and the American Way?'
Directed By Michael Chang

When the Atomic Skull escapes from jail again and not only causes  untold damage but also kills innocent civilians, the world begins to wonder if Superman's way of never killing his enemies is the best way after all.

A new team of superheroes named The Elite, led by Manchester Black, cross the line and start taking out criminals one by one, the world rally's behind them much to Superman's chagrin.

But whose way is right?

From the very beginning of the movie that's kicked off with a very Sex Pistols style beginning song and in your face title sequence you are left wondering what  to expect.

What we have here is a superb story written by Joe Kelly, based on his own story 'What's So Funny About Truth, Justice and the American Way?' that covers the very controversial idea of whether or not Superman's moral code of never killing his enemies is the right one.

The intelligent way that the writing shows the moral battle that wages in Superman's mind is superb.  I especially liked the way that Superman / Clark Kent even started to doubt himself and his abilities.  That was a really nice touch in that it was nice to see the character not being the perfect one, not always winning and actually showing some weakness.

Animation wise, it looks like the American style Anime that is so popular in superhero animation these days yet here it works.  That's most evident in the battle scenes that are spread all through the movie itself.  The action really pops off of the screen and really hooks the viewer in.

However that's not the strongest part of this release.  That's the cast work here, they really do make the well known and popular characters their own and puts their own spin on to them.  George Newbern reprises his role as Superman / Clark Kent and gives a truly superb performance of both strength and of fragility as well.  The addition of Pauley Perrette, from television's 'NCIS', really gives the character of Lois Lane spunk and bravery.  That's a nice change from the normal 'damsel in distress' style portrayal that we are so used to.

However there are two performances that really stood out for me.  One was Dee Bradley Baker as the Atomic Skull and Robin Atkin Downes as Manchester Black.

Baker gives a truly menacing performance as the Atomic Skull and really exudes evil as he destroys and murders throughout Metropolis.  Downes is another one who exudes evil but in a way that one minute he seems on Superman's side and then the next minute he is all out crazy.

The one thing that bugged me was when they show the scene in England, the city was drawn as if the entire place was boarded up, smoke filled and there were no cars yet when they wave out their hand, a black cat turns up.  The old fashioned view of what England looks like felt kind of jarring.

All in all, other than that one flaw, this is very good Superman.  In fact, I would even say that it's  one of the best animated features in the DC Universe range.  Once the movie ended, I wanted to see more and especially of Manchester Black.