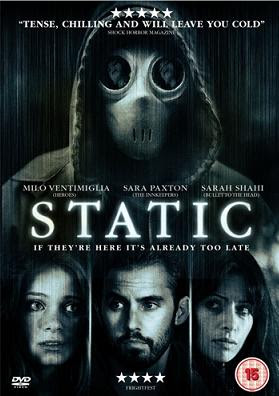 A couple facing marital problems after losing their child finds their life together further complicated by a mysterious visitor.

When I first saw the synopsis for this movie I have to admit that I kind of dismissed this as a bit of a rip off of a movie called 'The Strangers' and because I'd been a bit disappointed with that movie I wasn't all that eager to watch it.

I had a free evening and the house to myself so I figured I'd stick it on and see if it was worth watching and I have to admit that I quite enjoyed the movie.

While the movie itself isn't all that original, I have to admit that it's the performances of the cast that raise the quality of it all to a much higher level.

Out of the entire cast it's the leads that really rule over this movie in a brilliantly subtle way.  The way that Shahi and Ventimigllia portray the grief of a young couple who have lost their child is incredible.  I would have been just as content to watch that story as well as the one we're actually given.  A lot of their performance at the beginning of the movie is done using just facial expressions and a word here and there.  It's truly a beautiful portrayal by them both and really gave the movie an emotional edge that other movies such as 'The Strangers' were maybe missing.

When the inevitable invasion happens, it's actually very well handled.  Like I mentioned earlier, it's not the most original part of the movie I've ever seen, it just seemed to work a lot better than some others I have seen.  The one part that really bugged me was the simple fact that the ending seemed massively out of place.  It's an attempt to give a relatively happy ending to proceedings yet after the whole movie had a violent yet somehow subtle feel it just felt wrong.

Other than a really misplaced ending, this is a movie that is worth picking up.  It may not be the most original horror movie you are ever going to see but it's well worth buying just for the performances of the two leads Sarah Shahi and Milo Ventimiglia.  They really do come across as a couple that are completely destroyed by grief yet manage it without falling in to melodrama, instead opting for a slow and subtle performance.