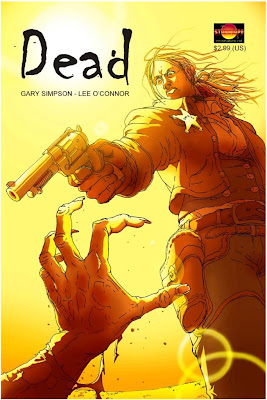 The Living Dead have invaded the Wild West and only one kick-ass beautiful female sheriff stands between the frightened townsfolk and zombie hell!

For fans of the Walking Dead; Zombies; 2000AD; Night of the Living Dead.

I have read a lot of zombie comics and books since I started this blog so when I stumbled on this title published by Starscape, I wasn't sure whether to read it straight away or leave it for a while.

Well, now that I have read it, I have to admit that I was pleasantly surprised at just how good it was.

The idea of mixing a western with a zombie horror is an idea that both sounds awesome on paper but also sounds like it could be a clash and not work.

However, this title works.  The writing keeps the action moving along at a fast pace and doesn't give the read a single chance to breath let alone get bored.  The characters don't really get a whole load of layering but in a story like this, you don't really need it for it to be an enjoyable read.  I especially liked the ending with it's cynical humor and action.

The stark black and white art by Lee O'Connor really gives the story a grim and dirty look and that really adds to the feel of dread that runs through the tale itself.  The action set pieces  are handled well with sharp splashes of black here and there.  That really seems to add to the brutality of the battles.

While not a perfect comic by any stretch, I found that I really enjoyed this one shot story.  I, for one, will be keeping an  eye out for more work by Gary Simpson and Lee O'Connor because if it's half as good as this one then it'd also be worth picking up.