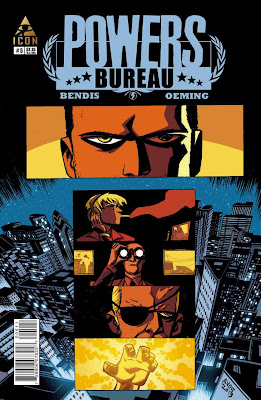 The Eisner Award winning series continues with Walker deep undercover in a dangerous criminal gang and Pilgrim pregnant with a 'Powers' baby.  Just what is going to happen next?

I've been really enjoying this series during the first four issues of 'Powers Bureau', although there just seems to be something missing from this issue yet I can't put my finger on to it.

The ingredients are all there for another good issue.  We have fast pacing, action and a good ending that leads nicely in to the next issue yet for some reason I just didn't enjoy this issue as much as the others.

In all honesty, it kind of feels like a 'spinning wheels' issue.  There were some developments in the story but they didn't really have the 'holy crap' feel that some of the others have had in previous installments.  That said, Bendis does make up for that with an ending that made me want to grab issue 6 as soon as I possibly can.

I think the problem with this issue is that where as the previous ones seemed like they were 'balls to the wall', this one just came across as a little pedestrian in the excitement level.

The art however is most definitely still at the massively high level that Michael Avon Oeming normally works at.  I don't think I've gotten a badly drawn comic with Oeming's name on it.  He's the most consistent artist in comics right now and that always ramps up the quality of any title that he works on.

While it's a bit of a disappointing issue when compared with the previous ones, it's still good one when compared to some of the other stuff out there.  Hopefully the momentum will pick back up with the next issue.