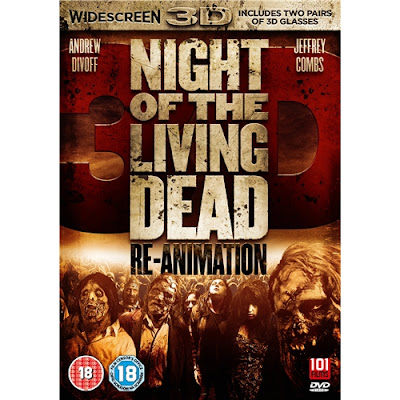 As the corpses re-animate, Gerald's inheritance-seeking younger brother, Harold (Jeffrey Combs) unexpectedly shows up and stumbles upon Gerald trying to keep the zombie outbreak under control.

Review
This movie is a prequel to the 2006 3D remake of the classic George Romero zombie movie.

'Reanimation' is definitely one of those horror movies that is for the fans of the cheap, trashy horror that packs in the laughs, albeit it mostly unintentionally.

Starring horror stars Andrew Divoff, from 'Wishmaster' and Jeffrey Combs, from 'Reanimator' and 'House on Haunted Hill', this movie is a hell of a lot of fun.

Is it a great horror movie? No but there are some good moments and some very funny jokes. There are also nods to the great Romero movies as well as a hell of a lot of pop culture references for the 'Buffy' generation.

While not all of the movie works, the constant stream of digs at Sarah Palin and Dick Cheney do start to grate after a while, it's definitely held together by the performances of Divoff and Combs. Divoff gives a wonderfully creepy portray of Gerald and Combs gives a great and camp performance as his brother. They really bounce off of one another and the chemistry between them also adds a lot.  I have to admit that if it wasn't for the two of them I probably wouldn't have watched the movie because it's their performances that make the movie an enjoyable mess, hence the score I gave the movie itself.

The 3D effect is used pretty well although it does affect your eyes after a little while because of the red/blue glasses but it's really worth sticking with it. Also the special effects are pretty good considering it's budget and the zombie effects work really well with the 3D element of the movie.

The special features are also pretty good for a mid budget movie and the out takes included here are really funny, especially those that include Divoff and Combs.

While there are part of this movie I didn't like, I still found it to be wildly entertaining and full of, sometimes unintentional, laughs so I definitely recommend it.

Posted by Pat Scattergood at 01:15