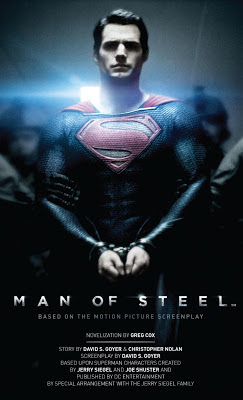 As a Superman fan and a massive book worm, I was very excited about getting a hold of the novel version of the new 'Man of Steel' movie but did it live up to my high hopes for it?

My main problem was with the writing style in particular.  In some places, it kept me positively gripped and wanting to turn the page to see what was going to happen next yet in other places, the writing seemed really pedestrian.  That was most evident during the battle scenes.  They should have had a big, epic feel to them but instead came across as watered down 'Dragonball Z' battles.

The scenes that I liked the most were the ones set on Krypton.  Cox really has a skill  for making the world there seem so real and exciting.

However, there were a couple of moments of bad editing that really took me out of the story.  In one scene, Superman's father is fleeing with Kelex but then in the same scene it switched to Kelor and then back to Kelex again despite Kelor not even being in the scene.  There were also a couple of other moments of bad editing where there were a few spelling mistakes such as spelling rifle wrong amongst other words.  Surely that should have been checked a little bit more closely.

While this is a good version of the movie and adds a couple of extra moments to the story itself, some of the action scenes being so pedestrian kind of hurt the story a little bit.  I would have liked a little bit more 'bang for my buck' as the saying goes.  The couple of bad editing moments took the rating down a little bit too but despite that, it's worth picking up if you're a fan of the movie or a fan of Superman as well.

Posted by Pat Scattergood at 02:44