Man of Steel: Inside the Legendary World of Superman By Daniel Wallace Review 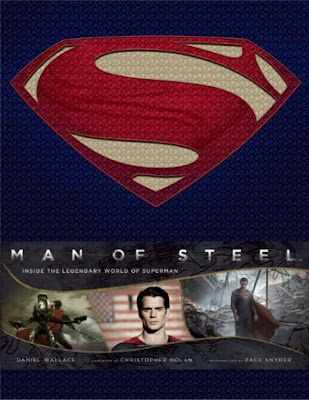 The official companion for the new Man of Steel movie featuring Superman. Man of Steel: Inside the Legendary World of Superman offers an intimate look at the reinvention of the world’s most iconic superhero through the eyes of acclaimed director Zack Snyder (300, Watchmen) and producer Christopher Nolan (The Dark Knight Trilogy). This unique companion book offers a rich selection of materials, from concept art and behind-the-scenes set photography to director commentary and interviews with key creatives, unlocking the secrets behind giving new life to an immortal hero.

After the hit and miss approach of the novel version of the movie by Greg Cox, I must admit that as much as I love the art books that I have reviewing recently for some of the big summer releases, I was starting to have my doubts as to whether or not this one would be worth reading.

When I got the book, the cover got rid of some of those doubts with it's beautiful yet simple look it.  The iconic S is there in all it's glory in an embossed form with some really great designs creating the background.

After opening it up one thing struck me.  There wasn't a whole load of concept art for the characters other than General Zod.  There were a couple of really inspired bits of art  work in the book but that's when it struck me that something major was missing.  Where were the concept art pictures for the Superman suit?  They must have gone through many different attempts before they settled on the one used in the movie but there's no pictures of the early ones.  That to me is a massive disappointment.

On the plus side, the things we do have here are absolutely stunning and really do a great job of showing the backgrounds and settings of the movie.  Yet once again, something just feels like it's missing.  There's a lot of information here but a lot of the book is taken up with pictures and little to no writing to explain certain parts.

That's not to say that it's a bad book.  It's really not.  I did really enjoy the it and the book is absolutely gorgeous to look at but it seems to be all flash and little bang.

If you're a fan of the movie itself or even if you're just a Superman fan then chances are you will absolutely love this book.  However, the inner nerd inside me that wanted to know the in's and out's of how they brought the new movie to the big screen then you may be a bit disappointed.

Posted by Pat Scattergood at 11:42