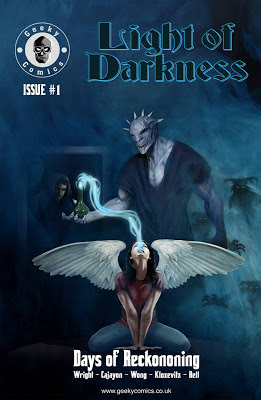 
Poppy Applebaum is an angel, but she doesn't know it.  Richard,her father is a pawn of Seribulous the Devils son, both have a different fight, both want to win, but only one can survive.

Everything seems to be normal in Poppy's life, until a series of unexplained murders, all within 40 miles of where she lives, turn the small town into a haven of terror.

Could Poppy's father be the mastermind behind the brutal killings?

After reading the superb first issues of 'The Lawless Ones' and of 'Exposed' put out by Geeky Comics, I had some massively high hopes for this issue.

A supernatural horror, this issue serves superbly as an introduction to the series.  You don't get a whole load of information in this about the characters but the reason it works so well is that it still gives you a very good look at just what to expect in later issues.

The writing by Victor Wright is well paced and really lets the reader know just what they're in for.  The story gets off to a good start by showing just what kinds of demons and scares populate the world that the comic is based in.  One of the main strengths of the issue is the ease that these creatures are mentioned and written about.  It's as if these demons are the most normal creatures in the world and I liked that approach.  Instead of it being melodramatic and over the top, the subtle writing of their appearance makes what they  do have more of an impact.

Art wise, this issue is spot on.  The dark and grimy approach that Cajayon has taken makes the issue feel a little bit like an 80's horror movie in that you're never truly sure what is lurking in the shadows.  The fact  that Cajayon uses then shadows and shading so effectively adds to that feeling of dread that runs through the issue.

After reading this one, I have to admit I can't wait for the second issue to see just where the story is going to be taken.  I love the look of the demons and of the grimy feel of the art because  that really adds up to make this a superb horror story that is well worth keeping an eye on.

'Light of Darkness Issue 1' is available to buy from here
Posted by Pat Scattergood at 01:20