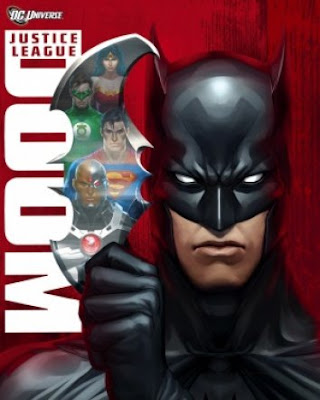 When Vandal Savage steals confidential files from Batman that detail the strengths and weaknesses of each member of the Justice League, the team has to find a way to not only stay alive but to defeat Savage's newly formed team of villains, the Legion of  Doom.

Just recently I've been watching a lot of the recent animated movies from both Marvel and DC with varying degrees of enjoyment.

After seeing the movie 'Superman vs The Elite', this one had quite a lot to live up to but it most definitely met that challenge head on.

Animation wise, it's once again done in the whole American style anime that is used so much recently.  Strangely, it has a slightly more cartoon style than the 'Elite' movie even though the movie itself has quite a dark tone.  Yet somehow, it seems to work with the story itself.  It's not the best of their animation but neither is it the worst.

Story wise, it's based on a story arc in the comics written by Mark Waid and you can really see which parts of the story came from those stories.  Yet for the most part, this story is an original one.  There are some superb character driven moments in the story such as showing the Green Lantern as not being perfect, showing Wonder Woman as being scared.  It's the little things like these that really give the characters more edge and I really like seeing the characters flaws and fears instead of them being heroic all of the time.

One of the best things about this release is the cast, most of whom reprise their roles from their various television shows with one notable addition.  Nathan Fillion, from television's 'Firefly' and 'Castle', is cast here as the Green Lantern and really gives the character a cocky and funny feel.  In fact, it's a little bit like having Mal Reynolds from 'Firefly' as the Green Lantern and it works superbly well.  Yet Fillion doesn't just play the character as cocky but as someone who is confident while at the same time full of doubt under the surface.

All in all, while I didn't think that it was as good as 'Superman vs The Elite', this was still a very well made and well written addition to the Justice League canon.  We, as fans, got to see other sides of the beloved characters and that made a nice change.  As a movie it's well worth picking up, especially if you are a fan of the JLA.