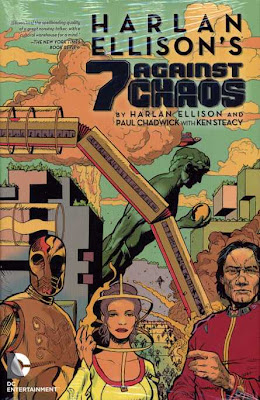 Harlan Ellison, science fiction's brightest luminary, has joined forces with multi-award winning artist Paul Chadwick, creator of the incomparable Concrete, to bring you SEVEN AGAINST CHAOS, a graphic novel that is singular, powerful and unpredictable. This extraordinary odyssey of mystery and adventure will take you to the rim of reality and beyond.

In a distant future, Earth is in grave danger: The fabric of reality itself in unraveling, leading to catastrophic natural disasters, displaced souls appearing from bygone eras, and sudden, shocking cases of spontaneous combustion. The only hope for Earth's survival is a force of seven warriors, each with his or her special abilities. But can these alien Seven Samurai learn to get along in time to find the source of the gathering chaos and save all of reality?

After reading a few interviews in which Harlan Ellison spoke with great affection about this story, I have to admit that I was quite excited to get my hands on it and read it.  Ellison has always been a good to great writer in my eyes by taking some well worn ideas and making them seem new and exciting.  However that's not the case here.

I'm not sure if I was expecting a bit too much perhaps because of his well deserved  reputation as a legendary writer but I came away from this graphic novel feeling a bit disappointed and a bit short changed with it all.

The story itself is slowly paced but that's always been one of Ellison's strengths.  He writes them that way to give the story time to grow and evolve yet here, things just seem like they're missing.  For example, the seven that are chosen in this story.  It's not really made all that clear as to why it's those particular people.  They all  have certain abilities and skills yet they're hardly used at all.  Why chose them for their skills and abilities if that's not going to be used in the story.  As for the story itself, it just seems quite disjointed and even rushed in places.  That kind of confused me because this project has been getting developed for years so why it feels rushed is beyond me.

The art, as well as the story, seem to have a really old fashioned feel to it.  That works really well with the art, although I've seen Chadwick do much better work.  Here, the art wouldn't look out of place in a comic book from the early 90's in fact.  That's not a bad thing, it's just that the art here doesn't seem up to his normal high standard.

All in all, this was a pretty disappointing graphic novel.  Maybe I expected too much considering the names involved but because of their really good reputations for great art and stories, I really thought this adventure was going to literally fly off of the page and really hook me in to it yet, for me, it crashed and burned.  A rather disjointed story that felt like there were panels missing isn't something that I expected from the team of Harlan Ellison and Paul Chadwick.  I expected much better but alas, we didn't get that here.