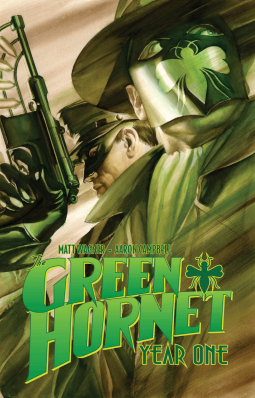 Written By Matt Wagner
Art and Cover By Aaron Campbell

At last, the thrilling origin tale of the Green Hornet and Kato, the classic crime-fighting duo, can be told!

After his father's death, Britt Reed takes control of his father's newspaper, the Daily Sentinel... but discovers that his true inheritance is his father's thirst for justice.

But will the Green Hornet and Kato survive when their efforts attract the attention of the sadistic enforcer called The Scourge?

As a fan of the both the classic television series but also of the series that Dynamite have been putting out recently, I was very eager to get hold of this collection.

Telling the story of the origin of the famous crime fighting duo, this title had a lot of promise and you know what?  With a steady hand at the helm in the shape of Matt Wagner, this wasn't going to be anything other than great.

The story here is superb and really has a dark, pulp feel to it without falling to the usual traps of sounding stilted or cliched.  In fact, the writing is intelligent, fast paced and full of some great moments.  The story behind how the duo got together is very well done.  I loved the early dynamic of the Hornet and Kato in that it didn't feel as polished as it is in the other series because it actually felt like they were getting used to being a team.  Normally when a company does a prequel series such as this one, they sometimes fall in to the mistake of making them seem like a ready made team.

Character wise, Wagner has once again made them his own.  They're very well written and you can really get behind their separate stories.  There was also a deft hand at work with the little threads of the story that all come together.  Wagner has always had a really good skill at knowing when to push the character development and when to bring all the threads of the storyline to the forefront.

Art wise, Aaron Campbell has done a very good job at making the art work seem dark like in a old Humphrey Bogart movie and really makes the action scenes pop out of the page.  However, even on the dialogue heavy scenes the art just really brings the characters to life.  That is one of Dynamite Comics major strengths.  They always seem to be able to choose the right artist for the right job and that's no different here.

If you are a fan of the Green Hornet series then you will definitely like this telling of the origin of the famous crime fighting duo.  There were loads of nods to the recent series as well as some nice character building moments too.  Don't forget the action however.  What would a Green Hornet story be without the action?  The art really made the story  come to life and that makes this one well worth picking up.

'Green Lantern:  Year One Omnibus' is available from August 27th 2013

Posted by Pat Scattergood at 02:19