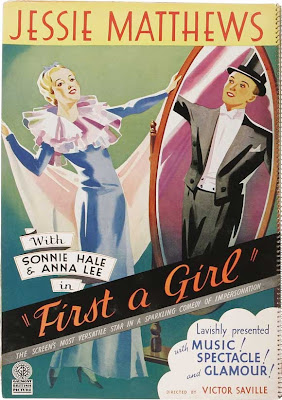 Elizabeth, a delivery girl, dreams of being a music-hall singer but she is refused at the first casting she takes part in. A bit depressed, she gets to know Victor, a would-be Shakespearean actor and another audition victim.

When Victor quite unexpectedly gets a female part in a music-hall number he unfortunately finds himself voiceless. Why wouldn't Elizabeth replace it? His new friend hesitates but finally makes her debut as ... a man posing for a woman!

She is noticed by McLintock, an influential talent agent who hires Mr. Victoria (Elizabeth's stage name) and launches his/her brilliant international career. One day, Robert, a handsome young man engaged to Princess Mironoff, makes friends with this young man posing as a woman posing as a man...

An English version of the German movie 'Victor Und Victoria', this classic from 1935 starred the real life husband and wife team of Jesse Matthews and Sonnie Hale.

This movie is most definitely a product of it's times but that's what makes it so hilarious funny and yet touching to watch.  There really seems to be a sense of wonder, innocence and naivety to the entire movie and that''s pushed forward by the positively charming performances, especially the leads Hale and Matthews.

You can really see that they were a couple in real life because their chemistry on screen is fantastic, especially in the scenes where they perform together.  Come to think of it, that leads us to a bit of trivia.  Hale, for the first part of the movie wears an incredibly long scarf as part of his costume.  It was apparently made for him by Matthews herself on the set of her previous movie 'Evergreen' but I digress.

The performances here have a real charm and a bit of a vaudeville feel to them.  In fact, it would be nearly impossible to not at least raise a smile thanks to this movie and it's performances.  Matthews is by far the star of the show.  Her charm and warmth really flows in to the character and you can't help but find yourself rooting for her.

Let's not discount Sonnie Hale however.  It's his facial expressions and slapstick style to his humour that is sorely missing in the movies of today.  Hale's quite physical style of comedy really worked brilliantly well next to the sheer innocence of Matthew's performance.

The song and dance set pieces range from the hilariously funny to the stunningly beautiful without the movie feeling disjointed at all.  This is probably due to the performances as well as  the direction by the great Victor Saville.  He really had an eye for the details in a scene and that's evident here as well.

I honestly think that this is the first version of the 'Viktor und Viktoria' story by far and if you are a fan of the classic black and white movies that Gaumont made then you are definitely  in for a treat.

Posted by Pat Scattergood at 14:48