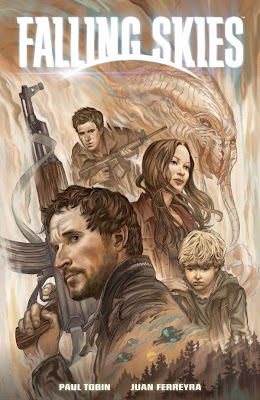 Based on the television series 'Falling Skies' from TNT and DreamWorks Television.

In the heart of Boston, following the devastating events of an alien invasion, history professor Tom Mason and his sons, Hal, Matt and Ben are just trying to survive.

After an extreme firefight with the aliens, Ben gets kidnapped.  Determined to get his son back, Tom joins forces with the Second Mass, a militia group that is taking the fight against the aliens.

But with the group's munitions supplies running low, Tom must locate an old friend to equip himself and his team in order to ensure the survival of the human race!

When I got this graphic novel I was a little worried that I might be a bit lost as I haven't been watching the show that's currently on television.  I picked it up because it sounded really interesting and plus, it was in a sale so who can resist some cheap science fiction?

Well, I need not have worried because they have done a very clever thing with this release.  It works as both a stand alone title, albeit with an ending that I assume leads in to the series, and as a link to the television show itself.

The story is very well paced and set out.   As a prequel to the series it works superbly well.  It shows just how everything happened and came about.  In fact, I'd even go so far as to say that I would now pick up the series.

The characters here are given a little bit of a back story, the main character gets the brunt of this for obvious reasons, but I get the feeling that this is a release that would definitely reward the long time viewers of the television show.  However, don't let that put you off of reading this one.  It's exciting and the pacing really gives it a cinematic quality.

Art wise, the characters really do look like the people in the show all while keeping Juan Ferreyra's unique style.  His art really works the best in the darker, shadow filled scenes.  Using the shadows and settings to his advantage, the impact of when the aliens and their creations appear is tenfold.  It really comes across as a page turner both story and art wise.

I was massively impressed with just how much I enjoyed this release.  Even though I hadn't seen any episodes of the television show itself, I didn't feel lost once.  In fact, it's made me want to see the show now whereas before, I'd wrongly dismissed it as 'just another science fiction' show.

Well worth picking up regardless of whether you are a fan of the series or not.

Posted by Pat Scattergood at 10:33