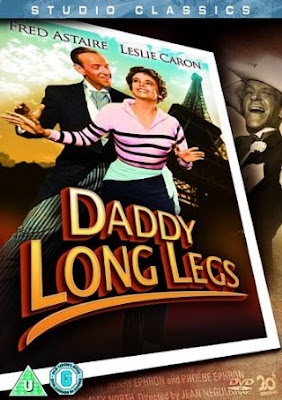 Wealthy American Jervis Pendleton III (Fred Astaire) has a chance encounter at a French orphanage with a cheerful 18-year-old resident, Julie Andre (Leslie Caron). He anonymously pays for her education at a New England college.

She writes letters to her mysterious benefactor regularly, but he never writes back. Her nickname for him, "Daddy Long Legs", is taken from the description of him given to Andre by some of her fellow orphans who see his shadow as he leaves their building.

Several years later, he visits her at school, still concealing his identity. Despite their large age difference, they soon fall in love.

As a massive Fred Astaire fan and of classic movies in particular, I was massively happy to finally get a chance to see this one after reading a bit about it online.

An actor such as Fred Astaire has a massive reputation to live up with his movies.  It's a high standard of quality indeed but does this one live up to that?

This is most definitely one of the most beautifully shot of his movies by far with some truly gorgeous scenes and set pieces.  There are also some great performances by the cast as well that really go a long way to making this movie have a really gentle heart at the middle of it.

However, for some reason it just doesn't stand up as well to the rest of his movies and that's a bit of a shame because there are truly some imaginative scenes in this movie and a really sweet story running through,

While it may seem a bit trite or overly sweet to some but that's of the main strengths of the movie itself.  It's that innocence that really draws the viewer in to seeing what's going on and for getting emotionally involved in the characters lives.

That's thanks to the performances of the cast themselves.  The pairing of Caron and Astaire works really well.  It's true that their set pieces aren't as amazing as the ones between Astaire and Rogers but in all honesty, I don't think anybody could live up to that standard.  That said, Astaire and Caron work really well together.  Considering their massively different dancing styles, they shouldn't mesh as well as they do.

The one thing that truly bothered me about the movie were the dream sequences.  It's very true that they look absolutely stunning and that they are very eye catching indeed but, for me, they just seem to run a little too long.  They make their point very well but I feel that they would have been a  little more effective if they had been slightly shorter.  That said, there are some fantastic moments of dancing in those sequences.

The Gallic charm of the movie gives it a lovely layer of charm and the sheer innocence of the performances give it a really adorable romantic feel.  The age difference between Astaire and Caron does push the falling in love side of the story a little bit but the performances really win the viewers over.

If you are a Fred Astaire fan or you just love classic movies then this one is well worth picking up.