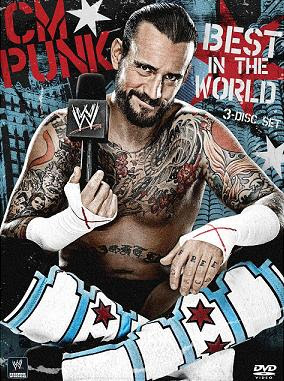 Documentary that seeks to explore the onstage and offstage persona of the WWE wrestler, CM Punk.

Since making his debut on the WWE scene as an extra at Wrestlemania XXII, where he was very much in the shadow of John Cena, Punk has battled his way to the top of the sport and has won numerous titles.

The documentary takes a look at his rise to prominence and the more unorthodox facets of his personality, such as his championing of the 'Straight Edge' subculture.

As a long time wrestling fan I have seen many wrestlers touted as the 'next best thing' come and go.  Some have stayed and made their names legendary and others have been quickly forgotten.

CM Punk is a WWE superstar that really doesn't look anything like the stereotypical superstar.  He's not big and musclebound and neither is just a punch, kick and repeat wrestler.  Instead he is unorthodox, unique and one of the most exciting wrestlers to ever come in to the squared circle.

This documentary shows the career of CM Punk from his very beginning up to now.  One of the things that really sets this release apart from the others that the WWE have put out recently is the sheer, sometimes brutal, honesty.  Punk doesn't hold back on his feelings about his career, about feeling held back and even about his family.  After all the stories that are told about him, it's easy to see all the pieces come together to make him in to the person he is now.

Some of the best stories here were about his early days in the WWE where he got sent to OVW and then in to the then revamped ECW because people didn't really know what to make of him and his unique look and skill set.  While not happy with his career in those days, he didn't come across as bitter, instead just like a man that learned things.  I especially liked the stories about how Heyman helped him in those days as well because they weren't just told from their point of view either.  They were told from both their point of view and other people's points of view that sometimes didn't agree.  It was nice to see such a balanced documentary instead of it being an ago stroking exercise.

As well as the the documentary, you get two discs that are absolutely jam packed full of CM Punk matches against so many different people that you are most definitely spoiled for choice.  My personal favourites being the no DQ against William Regal and the TLC match against Jeff Hardy.  Both are good for so many different reasons that if I listed them here it would turn in to a very long list.

There are also some deleted scenes that tell us some extra stories that really help to balance out the bits about Punk himself even more.

This is definitely one of the best WWE documentaries that I have ever seen.  Even if you weren't that much of a CM Punk fan, there's still plenty here to sink your teeth in to.  The portions of the release that talk about his early days as a wrestler and his childhood are really interesting because you get to see just how he became who he is today.  You're also spoiled for choice match wise as well so I honestly can't recommend this high enough.

Posted by Pat Scattergood at 12:35