The Trials of Lenny Bruce: The Fall and Rise of An American Icon By Ronald K.L. Collins and David M. Skover Review 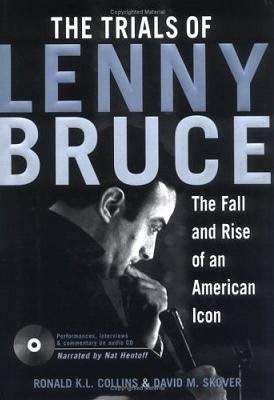 An in depth discussion and investigation of the life and trials of American legend Lenny Bruce.  Without Bruce, the stand up comedy world would be a much staler place.

Yet even with the First Amendment  of Free Speech in place, he still fell foul of the nations obscenity laws.

His controversial shows landed him in court on more than one thing in the strict, Government run decade known as the 60's.

Lenny Bruce was never one to sit on the fench with his stand up routines and opinions. America either thought he was incredibly funny or incredibly offensive. There never was a middle ground for him.

In the 1960's, the American government decided to take him to court on many times with each time taking a little bit more from him until his untimely death.  It was a bit like the Communist witch hunts in a way.

While most books about Lenny Bruce seem to portray him as a hero type of figure, this one does praise Bruce for his fight to uphold the First Amendment but does this while not glossing over his faults at all.  In fact, not only does it praise him for the way he stood up for his rights but it also mentions the times when he was in the wrong or when he was at fault for something.  I really thought that was  a breath of fresh air on a subject as important as Lenny Bruce.

When I first started to read this, I was worried that because it was written by two lawyers that it would be bogged down in the details. Far from it. While there are many parts about the legal process, it never bores the reader at all. I love how they connect certain parts of his routines to the legal troubles.

The writing style ensures that it flows nicely from page to page in that it doesn't try to bog the reader down in too many details at once.  I would go so far as to say that it's a 'slow burner' of a book that definitely rewards those people that stick with it and read it through to the very end.

All in all, a brilliant and important book about one of the all time greats of the comedy world. With no Lenny Bruce there would be no George Carlin, Bill Hicks etc.