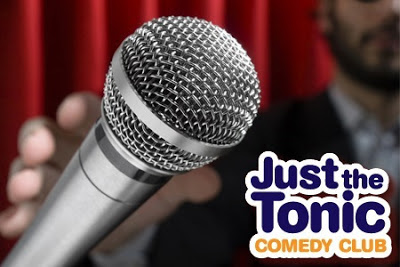 Just the Tonic promise to bring you the best in comedy from the national circuit. We will bring it at reasonable prices and with reasonable drink prices.

It is a great room. Small and intimate, perfect for a proper comedy venue.

Our Friday and Saturday Comedy Nights will bring mixed bill comedy and many other surprises.

As a stand up comedy fan, I've seen quite a few comedians and comediennes.  That's why I love the fact that comedy clubs are standing to become more popular.  It gives fans a chance to see both their favourites as well as ones they may not have seen before but in a more intimate venue.

We started the night off with a bang.  Susan Murray started the evening and would return between acts as the compere.  I hadn't seen her live before but after seeing her here I would definitely go to one of her shows.  Her quite sarcastic delivery and way of interacting with the crowd was a superb choice as compere because she really got the them excited for each person coming up to perform.

Next up was a comedienne by the name of Debra-Jane Appleby, a Northern lass with a real knack of being able to poke fun at herself without it turning in to a 'poor me' routine that seems to happen with comediennes who go that route.  In fact, her comedy was a breath of fresh air because she came across so natural that it felt like you were sat in a bar with a mate and just having a chat about life.  I also loved how she dealt with a heckler from Camden, who seemed content to try to shout over her.  I doubt the heckler will be trying to do that again in a hurry.

After a brief interval, Susan Murray returned to get us warmed back up for the next act, Tom Deacon.  I have to admit that while I didn't find him as funny as Murray or Appleby, his humor still got quite a few laughs from me, especially the getting hit by a car story.  That may not sound funny here but the way he told the story made it sound like he was a mate telling you about his latest exploit.  There were a couple of jokes near the middle of his set that didn't work as well for me but he definitely ended with a bang.  Another comedian that I wouldn't mind seeing some more of.

Finally, after a second interval and more laughs from Murray, we were treated to a set from the brilliant Jarred Christmas.  This is the third time I've seen Christmas and while I'd heard a few of the jokes before, he has such an easy going personality that his sheer enthusiasm makes it feel like you've not heard them.  His witty and sarcastic delivery definitely makes him one of my favourite comedians and he was one of the main highlights for me during the evening.

However, the best part of the evening for me was, by far, Susan Murray.  As a compere she managed to get the crowd warmed up so easily that it was almost as if they were eating out of the palm of her hand.  Her jokes came thick and fast and often had me in tears of laughter.

All in all, a great night and I strongly urge anyone to get down to their local Just The Tonic club or comedy club in general and see one of these types of comedy night.  While you might not like everyone on the bill, the intimate nature of the performances really give the evening of comedy a personal feel.  Considering the Just The Tonic nights are cheaper than a cinema trip, what more could you want?  Great value for money and a great venue.