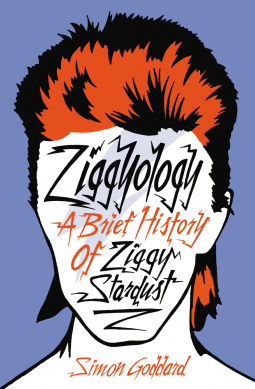 It was the greatest invention in the history of pop music – the rock god who came from the stars – which struck a young David Bowie like a lightning bolt from the heavens.

When Ziggy the glam alien messiah fell to Earth, he transformed Bowie from a prodigy to a superstar who changed the face of music forever. But who was Ziggy Stardust? And where did he really come from?

In a work of supreme pop archaeology, Simon Goddard unearths every influence that brought Ziggy to life – from HG Wells to Holst, Kabuki to Kubrick, and Elvis to Iggy. Ziggyology documents the epic drama of the Starman’s short but eventful time on Planet Earth… and why Bowie eventually had to kill him.

Simon Goddard, the author of the superb 'Songs That Saved Your Life: The Art of The Smiths', turns his hand to the creation of one of the biggest music rock superstars the world has ever known.  Ziggy Stardust.

In creating that persona David Bowie in turn created one of the most influential musicians of the musical world and here Goddard creates a really well written look at that moment.

I have to admit however that the first part of the book does feel a little clunky in places but for the most part, this book is really an interesting read.  In fact, for Bowie fans, this is a superb look at the creation of Stardust.  It really reads like a story that would make a pretty good movie actually.  There are some quite cinematic parts that really bring the story to life.

I loved how Goddard really linked the creation of Stardust to things such as Kubrick and others that may have proved influential in his creation.  I would love to pick Bowie's brain about his Ziggy Stardust period but seeing as that will never happen, this is as close as us fans will probably get.

This is a rather odd biography but Goddard's easy style of writing really suckers the reader in to the book and, even though I hate the term, makes it a complete page turner.  The wonderfully descriptive prose made the Ziggy Stardust come alive for me but it's slightly let down by a couple of clunky moments.

For Bowie fans, this is well worth picking up.  If you're not a Bowie fan then you may not like it as much but it's still worth at least taking a look at for it's odd yet  effective look at the creation of one of the biggest cult figures in rock music history.

Posted by Pat Scattergood at 14:51