An Interview With Paul Collicutt, Author and Artist of 'The Murder Mile' 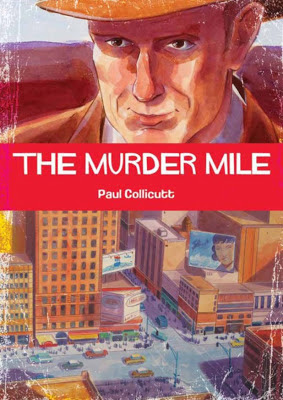 Paul Collicutt, author and artist of 'The Murder Mile' has very kindly popped in to Curiosity of a Social Misfit to talk to Patrick Challis about his graphic novel and what inspired him to create it.

PC:  What inspired you to write 'The Murder Mile'?

PC:  In a nutshell it was just one image. The picture of Roger Bannister sweeping majestically past an heroic but tiring John Landy in the final 110 metres of The Mile final at the 1954 Empire Games was iconic. Landy had lead from the gun at World record pace but Bannister had stuck to his own guns and followed at a pace he knew he could hold. When he past Landy in the final stages Landy looked to the inside of the track and that moment was caught on camera. I thought what if Landy heard a gunshot…what if someone was trying to shoot him? From there I felt a story started off in my head. I knew I wanted to do a graphic novel that celebrated athletics, a sport I love dearly but I also wanted to paint images of big American cities and flashy cars….a 1950s technicolour story!

PC:  You combine a hard boiled detective story with the real life drama around the attempts to break the 4 minute mile.  Was it difficult to combine the two?

PC:  It did take a bit of thinking about but it wasn’t too hard. In 1954 the story in Athletics was not performance enhancing drugs but there was scandal around so called professionalism. It seems ridiculous today in the era of highly paid sports people that athletes could be banned for taking a hundred dollars in travel expenses and yet they were…Wes Santee was a victim of this stupid and petty policy.

PC:  I was struck by the authentic feel of the races and the historical atmosphere of era of sporting history that you have set the story in.  Did you have to do a lot of research?

PC:  Yes. I’m a track and field fan anyway and I love all the history of it so it wasn’t a hardship for me. Years and years ago I picked up roger Bannister’s autobiography in a second hand bookshop in Lewes, Sussex. I devoured his words and was inspired by his story and the way he told it.

When I  started off on the story I thought no problem I know all about athletics the research will be a doddle. However I then realized that if I didn’t get it right or as close as I could for all the races then I’d never be able to hold my head high in running circles ever again. I buried myself in research to try and find out what the stadiums looked like…what all the uniforms looked like etc. I’m sure I’ve made some mistakes but I can honestly hold my hand up and say I think I’ve got the races down pretty well.

PC:  Did your love of track and field influence the tone of the story?

PC:  Yes. The story reflects a number of things that I feel about athletics as a sport….mainly that it is full of positive individuals…so Dan Stone was never going to be your typical down on his luck PI with a drink problem. I thought it might actually be interesting to have him as a fully operating human being. The FBI agent in it is called Agent Ashenfelter. His name is a tip of the hat to Horace Ashenfelter who won the 1952 Olympic Games Steeplechase and was also a fully fledged FBI man.

PC:  The art work in the graphic novel is absolutely beautiful and does a great job of capturing the drama of the story, especially the race scenes and the war back story.  Do you think the art makes 'The Murder Mile' stand out from other graphic novels?

PC:  I think it’s different from many graphic novels but I have to say there are also a lot of varied graphic novels out there with absolutely outstanding and individual artwork in them. I love painting and I find it such fun that I was prepared to paint a full story.I worked on a number of different scales. At first I thought it was a brilliant idea to paint al the panels as individual bits of artwork….and yes it was great but after a while I knew it was going to kill me so I began to paint all the pages as pages ( much more sensible really ). I worked in acrylics and applied them like watercolours….and yes I did everything on a large scale.

PC:  Do you have a favourite runner out of all of those legendary athletes that ran the four minute mile?

PC:  All three of the athletes that had a chance at it were outstanding people….athletes and gentlemen I believe. I’d have to say I admire Wes Santee’s toughness in getting so close to a sub 4 mile by himself on a soaking wet track after a hailstorm, Roger Bannister’s fantasticly astute pace judgement and Land y being just such an all round tough athlete and true Gent.

PC:  Will there be another Daniel Stone story for us to sink our teeth in to?

PC:  I hope so as I think he still has stories to tell. I’d like to do another one with him that also covers running.

PC:  What's next for Paul Collicutt?


PC:  I’ve been working on a poster of the World record Holders for The Mile and I’m also working on ones for the Men’s and Women’s Marathon. I also work for Templar Publishing doing a series called Robot City. Here's the website ...http://www.robotcity.co.uk/

'The Murder Mile' is out now to buy!
Posted by Pat Scattergood at 15:22