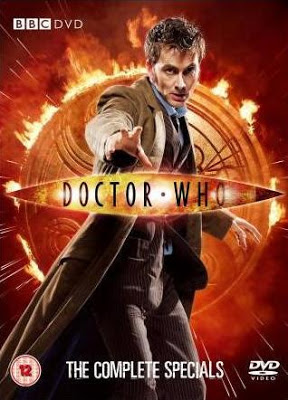 Littered with exclusive extras, this irresistible box set contains all five 2009 Doctor Who specials. With 5 discs of monster fighting, all-action adventure, The Complete Specials is a fitting finale to David Tennant's triumphant reign as television's most entertaining Doctor.

Includes all the Doctor Who Specials from 2009!

The Next Doctor: It's Christmas Eve in 1851 in The Next Doctor and Cybermen stalk the snow of Victorian London. When the Doctor arrives and starts to investigate a spate of mysterious deaths, he's surprised to meet another Doctor (David Morrissey), and soon the two must combine forces to defeat the ruthless Miss Hartigan (Dervla Kirwan). But are two Doctors enough to stop the rise of the CyberKing?

Planet of the Dead: Starring Michelle Ryan and Lee Evans, Planet Of The Dead was the first of this year's specials. When a London bus takes a detour to an alien world, the Doctor must join forces with the extraordinary Lady Christina. But the mysterious planet holds terrifying secrets, hidden in the sand. And time is running out, as the deadly Swarm gets closer...

The Waters of Mars: The Waters of Mars welcomes Lindsay Duncan as the Doctor's cleverest and most strong-minded companion. The Waters of Mars is a dark, scary thriller that sees the Doctor land on the planet Mars, at a base in peril. A creeping infection beneath the Martian surface threatens not only the human race, but also the Doctor's most fundamental beliefs. Together with Adelaide Brooke - the base's commander - the Doctor must stop a seemingly unstoppable menace before it can reach Earth, and wipe out mankind.

The End of Time: Part One: Join the Tenth Doctor for his final journey in The End of Time Parts One and Two, when his psychotic nemesis the Master has been reborn, on Christmas Eve. With both determined to cheat death, the battle ranges from the wastelands of London to the mysterious Immortality Gate, while the alien Ood warn of an even greater danger approaching, as a terrible shadow falls across the entire Universe.

The End of Time: Part Two: The Doctor faces the end of his life as the Master's plans hurtle out of control. With the sound of drums growing louder, and an ancient trap closing around the Earth, the Doctor and Wilf must fight alone. But sacrifices must be made, and the deadly prophecy warns: "He will knock four times."

At the end of series 4 it was announced that instead of series 5 we were going to get 4 specials in the next year which would culminate with the leaving of RTD and David Tennant, so were they any good?

Yes and no is the answer, DT tries hard and turns in an excellent performance as always but you can sense RTD is tired of the show now and the excitement of series one is long gone, tbh it's probably best that he decided to go, and if you've have read the book A Writers Tale which is set behind the scenes of his final episodes you get the sense he didn't really want to do these.  I recommend getting this book,  it's a great read.

Ok onto the episodes themselves.

Oh dear, in previews this looked so promising but the finished episode is a bit of a mess, at the time it was known that DT was leaving the show and a big deal was made out of whether or not this would this be his last episode.  Of course not, the story is actually about a chap called Jackson Lake who believes he is the doctor, and along with the real doctor fights against Mercy Hartigan and some Cybermen. Kids will love this especially the Cyber King but tbh it's a bit of a mess and I doubt anyone would watch it twice.

Planet of the Dead

I am in a quandary here, I love Dr Who and don't want to be negative but how do you write a positive review about an episode that is made up almost entirely of filler?  Honestly nothing happens, it's not a bad story just boring, cardboard cut out characters, a convenient psychic to tell us again that DT IS LEAVING and that's about it, no wait a minute there is a positive.  Lee Evans brilliant performance as UNITS scientific advisor Malcolm, it's worth watching this story just for him, why he hasn't returned beats me.

The Waters of  Mars

Now this is more like it, an excellent story a cast you care about, a shock ending this one ticks all the boxes.

One type of story  Who does well is a people trapped in a base story and this ones a doozy, I don't want to spoil it for anyone but highlights are

The acting DT in particular is brilliant.
The monster, an actual scary menace.
The Timelord Triumphant (a mind blowing idea).
That shock ending.

How this can be so good after the last 2 efforts bemuses me, but don't miss it

So we come to DT's last two episodes and I really want to love them, but they are bitty, some bits are excellent.

For example anything featuring Bernard Cribbens, but especially the cafe scene and the speech on the spaceship, oh and his final look at the doctor will bring a lump to your throat.

The cactus peoples rescue of the doctor is hilarious

The doctors final journey and regeneration. This will make you cry

Super powers Master? Really?  That was considered a good idea?
The story is really weak

These two are worth watching but prove that occasionally someone needs to say to RTD, that script is terrible don't make it.

So that was the end of the RTD & DT era and to be fair there was more good than bad, but now we have Steven Mofatt and Matt Smith, and some of the best Who ever is about to come.

Posted by Pat Scattergood at 13:53