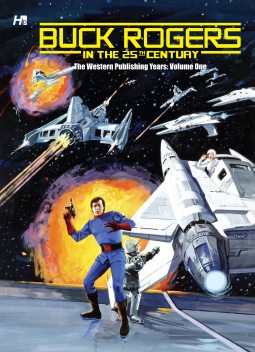 Fans of the TV show will finally be able to re-read these adventures in a deluxe hardcover collection with
tons of extras including rare publicity photos, blue prints for the show's models and effects, movie posters, and much more. As a bonus, Gold Key issue #1, published in 1964, will also be included in this volume.

Nostalgia can be one of two things.  Your best friend or your worst enemy but which one is this?

Well to be honest, it's the second one.

This isn't an awful collection by any stretch of the imagination but it's not the great one that we were hoping for either.

The writing just doesn't seem to have the warm charm of the series, instead coming over as clunky and even boring in places.  That's a real shame because even now the series still holds my interest.  This collection however didn't.

I got to the halfway point and actually felt rather bored by the collection.  That's a real shame because I was really looking forward to seeing all  the familiar characters again.  Maybe it was the sense of nostalgia that hyped up my hopes for these stories but either way, it's not really a collection that I would go out of my way to read again.

It's the same with the art work.  At times it is hit and miss and others it comes across as workmanlike instead of looking futuristic or exciting.  There are a few panels that even come across as quite simplistic as well and that really hurts the story.

I know this is quite a short review compared to my others but I just really couldn't get in to the collection at all.  It's a real shame because as a fan of the series, I had really high hopes for this one.  Instead of getting this, I suggest waiting for the forthcoming series by Howard Chaykin instead.