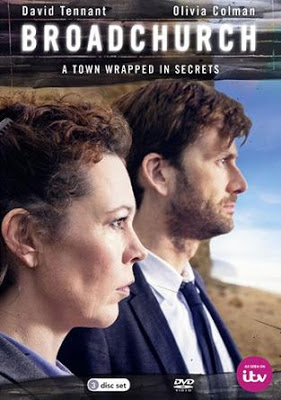 A hot morning in July and the Dorset town of Broadchurch is bracing itself for the tourist season when Danny Latimer, an 11 year old schoolboy, goes missing.

His mother, Beth, frantically starts to search for him while her best friend, Ellie Miller, a local police officer, arrives at work to discover that the promotion she thought was hers has gone to D.I. Alec Hardy an outsider with a reputation for failure.

When Danny's body is found beneath the picturesque cliffs that dominate the town opposites collide. Both Miller and Hardy are determined to solve the mystery of Danny's murder, Ellie perhaps too sensitive to the people in her community; Alec as effi cient as he is blunt. When news of the crime spreads through the town, a chain reaction begins which will put Broadchurch under a national spotlight, pulling the town, its residents and its secrets, apart.

After a flurry of hype after it's successful showing on television, 'Broadchurch' bursts on to DVD but does the show still stand up to repeated viewing?

The answer to that is a most definite yes.

The story itself is powerfully written and while it's a police drama about a brutal and horrific crime, it's not just that.  It's a superbly written drama about the grief, the pain and the anger that surrounds both the crime and then the shocking reveal of the murderer.

The intelligence of the writing really makes it rise head and shoulders above the other British police dramas that are doing the rounds.  That's not the main strength of the series either, regardless of just how well written it is.

That's the performances of the cast.  Each of the characters, no matter how major or minor the part is, have been performed so well that each one is memorable.

There are so many good to great performances that it really is hard to pick any to highlight.  One of the best of the best is Pauline Quirks performance.  I'm used to seeing her in either comedies or in quite light hearted  fare but here she plays her part in a very strong but subtle way, even going so far as to be one of the most memorable performances of the cast.

David Tennant is positively superb as DI Alec Hardy, a policeman with a past record of failure but with something to prove.  Tennant's performance really forms the backbone of the series.  The failure of a past case really haunts him and makes him determined to solve this one yet Tennant plays the characters fear and anxiety in a massively addictive way.  In fact, I would even go so far as to say that I honestly couldn't take my eyes off of his performance any time he was on the screen.

One of the performances that surprised me the most was Olivia Colman.  I'd never been that much of a fan of hers before but after seeing this one, I'm going to rewatch her other performances with a fresh eye.  She is absolutely superb.

Special features wise, while I would have liked to have seen a little more included here, I was massively surprised with how good the behind the scenes parts were.  There were so many tidbits of information about the series and about the cast that it really added layers to the series itself.

If you are a fan of crime drama or  even just a fan of  intelligent television shows then I honestly couldn't rate this one high enough for you.  It's intelligent writing, strong performances and hard hitting scenes really makke this one of the best things I have seen on television in a very long time.