A Taste of Blood Wine by Freda Warrington Review 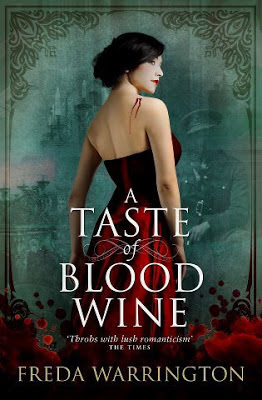 Karl von Wultendorf, though a vampire himself, is completely under the power of his maker, Kristian, who demands total servitude.

Charlotte Neville is the daughter of a Cambridge professor. She has grown up questioning all that she sees. Because of this, she is seen as a wallflower by British society. She lives with her father and assists him with his experiments at their home.

When Karl meets, and falls in love with, Charlotte, he realizes that he must find a way to kill Kristian, for Kristian has decided to teach Karl a lesson in power, by devouring Charlotte.

I've always been a fan of vampire fiction but ever since 'Twilight' turned the blood thirsty creatures of the night in to creatures that sparkled, the genre has been littered with some incredibly poor imitations of the fanged blood drinkers.  Hopefully this book will reverse that trend by introducing some life in to the undead genre.

Originally published in the 90's, Titan Books have re-released this, the first book in the 'Blood' book series by Freda Warrington.

I won't give away too much of the storyline because that would ruin some of the really good twists and turns that are contained in this book but that's not even the start of the good things included here.

Set in the 1920's, Warrington's wonderfully descriptive writing style really makes the setting come alive.  In fact, she has written this story in such a way that it's almost as if the settings are a character in the story itself.  As for the characters, that's most definitely one of Warrington's major strengths.  She takes the Anne Rice approach to characters in that she gives them time to breath and grow as the story progresses.  I have to admit that at first I wasn't too sure about the Charlotte character as I just couldn't get behind her motives and reasons for how she is yet as the story went on, I really started to get in to what was happening to both her and the other characters.

The story itself really has a great mix of fast paced twists and turns and slow burning character development with some good old fashioned sexual intrigue and liberal doses of romance as well.  Warrington has managed to pretty much include a bit of everything for every type of vampire fiction fan.

Another thing that this book does well is that it serves as the first book for a series brilliantly well.  It sets up the characters, the surroundings and even hints at some of the upcoming surprises in the other books.  I for one, am looking forward to seeing the second book in the series.

Posted by Pat Scattergood at 14:15