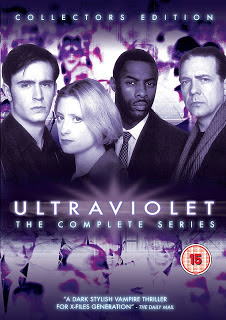 Written and Directed By Joe Ahearne

All six episodes of the supernatural thriller.

They look like us. they act like us. For centuries vampires have co-existed with humans. Until now....

Now mankind has the ability to destroy itself, and the vampires need to take control of their threatened food supply. CIB - an elite government force has been formed to combat the threat. But when eternal life is on offer... no one is beyond temptation.

'Ultraviolet' was a British show from 1998 that for some reason just didn't seem to take off on the broadcasting channel despite the fact that it was an intelligent vampire horror with characters that were well written and well grounded despite the horrific things happening around them.

Here that intelligent writing  really keeps you on the edge of your seat.  The slow and deliberate pace of the episodes give the viewer a chance to get to know the characters and their motives and that really raises the television show up to a much higher quality.

The directing by Hearne really gives the show it's gritty and downtrodden feel.  I loved how grimy and dirty the show looked.  In fact, it really felt like the director used that theme throughout the show as if it were another character.

Cast wise there are some superb members that do a really good job with their portrayals of the characters and with the intelligent dialogue.  Jack Davenport and Idris Elba are by far the best of the very strong cast, giving memorable performances that the viewer will really get behind.

The special features here are fantastic and even includes a brand new retrospective for the fans to really sink their teeth in to.  Sorry, I couldn't resist it.

All in all this is an absolutely essential purchase if you want to see intelligent television programming and if you are a fan of vampires when they used to be scary and not just sparkly.

Posted by Pat Scattergood at 22:36