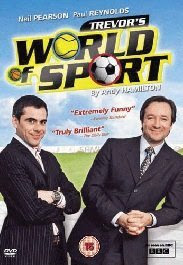 Set in the cut-throat world of sports agents, Neil Pearson is Trevor, decent, honest and desperately struggling to stay afloat in the shark-infested waters of the business, with one of the most ruthless sharks being Trevor's best friend and business partner Sammy (Paul Reynolds).

The hard-working duo are supported by their well-meaning staff: Theresa, an extremely religious personal assistant, Heidrun, their razor-sharp German receptionist, and Barry, their too-sweet-natured office assistant.
In a world that seems to be falling apart around him - his marriage on the rocks, an attempted buyout of the company, a new-hire with ulterior motives - Trevor is struggling to maintain his integrity, his equilibrium and his temper - none of them with much success. And then there are his recurring nightmares...

Andy Hamilton has created some of the best comedy shows on television from 'Drop The Dead Donkey', 'Outnumbered' and 'Bedtime' amongst others.

This one, 'Trevor's World of Sport', has long been requested for a DVD release by it's fans and rightfully so.  Full of witty one liners, good characters and satire to the hilt.

However, if you are expecting a laugh a minute style sitcom or something similar then, and let's be honest here, you are absolutely out of luck.

The cast do a superb job with the intelligent writing by Andy Hamilton.  The best of these being Neil Pearson as Trevor.  He really plays the neurotic side of Trevor's personality really well and adds many different layers so what could have been just a cliched character.  Also, it's always nice to see Claire Skinner in something as, even though she doesn't really have a lot to do in the seven episodes here, she is still capable of giving a great performance and is criminally under rated.

One of the best of the characters is the well meaning lady in the office named Theresa.  She always seems to pop up and have some of the best laughs.  That's due to the superb comic timing by Rosalind Ayres and her dead pan delivery of her lines.

On the down side of the release, the show never really managed to find it's footing.  The intelligent writing from Hamilton is there as are appearances from the man himself as Dave, the cast give good to great performances and there are some great cameo appearances by various sports legends.  Yet for some reason, the show just doesn't take off like it should.  In fact, the best way to describe it would be as hit and miss.

The special features are short but manage to pack in a surprising amount of information and humor in to it's short run time.   The interview with Hamilton and hearing him talk about the show itself is a good addition to the release as the man is a superb comedian and one of the most under rated television writers.  It was good to hear his thoughts on why the show didn't take off a well as he had hoped and talking about the fans that want to bring it back.  It's always nice to find a personal touch like that on a release.

While hilariously funny in places, the show just doesn't seem to gel for me.  I did really love the sheer amount of cameo appearances in the series and Andrew Lincoln's performance as a formula 1 driver was a highlight for me, I just couldn't get in to the series as much as I'd hoped.  Maybe that's down to the fact that it was cancelled after only seven episodes but I'm not sure.

However, we may not have a lot here show wise but what we do have is, for the most part, very funny and to be honest, that's all you really want from a comedy show isn't it?