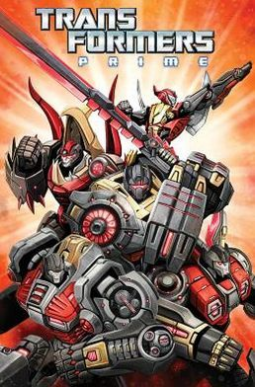 Bridging the story from the Fall of Cybertron video game to the Prime TV show — the Dinobots hold the line as Cybertron falls!

With Optimus Prime and the Ark long gone, the rest of the population makes their escape from the dying world — but Shockwave remains behind, continuing his experiments!

While I am a 'Transformers' fan, I'm not the sort of fan that complains  and bitches when changes are made to the characters.  I mean after all they have to change and evolve or they will get stale.

So after seeing the 'Transformers: Prime' television series, I was quite eager to read this title and see what happened to bridge the gap between the game and the series.

I have to admit that I was a bit let down in all honesty.  Maybe I had set my hopes too high but as much as I did enjoy this release, it just didn't make me think that it had been worth the wait.

The story itself is well done in itself.  I did really like the fact that the Autobots weren't all one big family and that there was an element of mistrust between them and the Dinobots.  I also liked the reappearance of the 'Shockwave' character as he has always been one of my favourites.

The one thing that really hurt this issue was the really hit and miss art work by Padilla.  In a lot of the group shots and the action scenes, you really couldn't tell who was who and that left it really confusing me.  In other places the artwork was really well done and well thought out.  However, one of the things that really hurt the characters was the drawing of Grimlock.  His chest plate looked like a hi-fi speaker and there was just something that I couldn't put my finger on that was wrong with his face.  It just looked off.

I haven't seen much of Agustin Padilla's work but after this and his art on the 'Borderlands: Origins' comics,  I don't have much of a desire to rush out and see more of  it.

While this wasn't a terrible story, it really wasn't, the dialogue just didn't seem right and the art work was severely hit and miss.  That really hurt the story and as such I've marked it down.

The best way to describe this release would be that it's one to read if it's there in front of you but there's really no need to rush out and buy it.