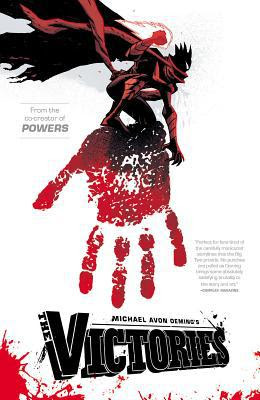 Not long from now, all that will stand between you and evil are The Victories: heroes sworn to protect us from crime, corruption, and the weird designer drug known as Float.

As one member hits the streets looking for blood, he discovers himself touched by a painful past through the powers of a psychic. Will this trauma cause him to self-destruct or to rejoin the good fight?

A very adult superhero adventure from the co-creator of Powers.

Michael Avon Oeming is one of my favourite comic book artists and rightfully so.  His art in 'Powers' amongst other titles is consistently good to great and he can really ramp up the quality of a title with his art alone.

This release is both drawn and written by Oeming but can he handle both sides?

Is this a great graphic novel?  No but there are flashes of brilliance, especially near the end of the title when everything starts to come together.  However, there are parts of the title that seem to be running on a treadmill so to speak.  The story was there but didn't seem to be going anywhere but then all of a sudden everything started to gel and it became a very good title.

The story, as I said before, had a couple moments where it didn't seem to be going anywhere but for the most part it is a very good title.  Would I read the second volume when it's released?  Hell yeah.  I really want to what is going to happen to the characters.  The shocking ending raises loads of questions so I can't wait to see where Oeming is going to take the characters next.

Talking of characters, Faustus is definitely one of the best  characters that Oeming has created for one of his various titles.  I loved how raw his flaws and his painful past were and how he wasn't infallible.  It's rare in the comic book world recently to find a character with as much depth as this and that has always been one of Oeming's strengths and that's no different.

Art wise, it's Oeming.  What more can I say?  As always the art is stark, shocking and very well drawn indeed, which goes to show just why Oeming has such a good reputation as a comic book artist.  The way the characters are drawn really give the graphic novel a 'Spawn' style feel but in a much starker and jagged way.  That to me raises the art here to a much higher level quality than with other titles that have been released recently.  There's no clinical and dead straight lines here.  It's all a matter of sharp edges and flashes of violence that really stay with the reader.

If you are a Michael Avon Oeming fan then you should definitely pick this one up.  It's one of the those titles that really grows on you and the sort of title that you will notice new things each time it's read.  The best way to describe it would be 'Spawn' meets 'Powers' but with an Oeming twist and that's most definitely a good thing!

Posted by Pat Scattergood at 08:56