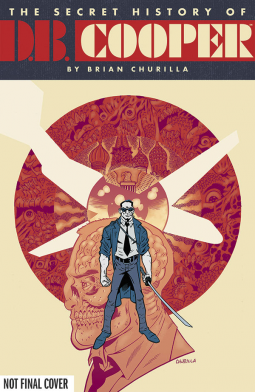 The most infamous airline hijacker of all time, D.B. Cooper, remains on the FBI’s most-wanted list almost 40 years after the crime.

For the first time, the secret history will be revealed! During the height of the Cold War, a fringe group within the C.I.A. wages a crusade on the deadliest battlefield of all: the mind.

Aided by powerful psychotropic compounds, Cooper assists in a campaign of psychic assassination against the Soviets, but are his government’s motives the same as his own or is his true mission something else entirely?

D.B. Cooper is one of the most famous people in American crime history, especially considering he is apparently still at large after jumping out of a hijacked plane with a butt load of money.  Thanks to the fact that his crime is one of the most sensational and infamous in American history there have been many conspiracy theories about how he got away with the crime, where he ended up and a hell of a lot more.  Most have been sensationalist nonsense and some seem very plausible.

Here the cartoonist Brian Churilla, has created one of the weirdest stories based around D.B. Cooper that I have read in a long time.

If you can suspend your disbelief for a while, this is really good albeit strange in places story.  The idea behind it that Cooper was being used as part of the infamous MK Ultra experiment and getting turning in to an assassin is a good story point.

The way the story unfolds blends fact in to fiction and vice versa in such a way that you end the book not sure of what you have just read.  I kind of liked that.  It made me want to read it again to see if there was anything else that I may have missed.  Churillo really does combine the scenes that are happening in the 'real world' with the 'drug altered' scenes brilliantly.  I loved the 'drug altered' scenes the most because of the simple fact that because they seemed so out there that you could read them again and again seeing new things each time.  The best of these is the one eared teddy that Cooper talks to because like in 'Happy!', the idea seems silly on paper but works in practice brilliantly.

That said, sometimes the rest of the story just didn't gel for me.  Like  I said earlier, it was very well written yet it the parts didn't add up to the total I wanted them to.  It's one of those sorts of things where you can feel like there is something that just doesn't feel right but you can't place your finger on it.

The art is a bit like the story.  It looks superb and works brilliantly well in places but not in others.  I would say that it's hit and miss but that would be too harsh a comment.   The art work is good all through the graphic novel but some of the panels just didn't hook me in like they're meant to.

If you can suspend your disbelief for a bit then you will definitely enjoy this rather unique and sometimes bizarre title.  It's well worth picking up as a 'something different' title.

Posted by Pat Scattergood at 12:41