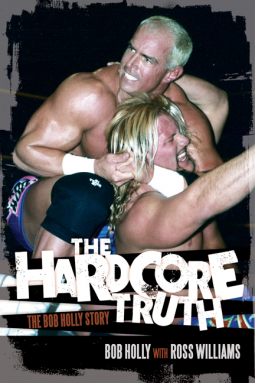 
Long before he became “Hardcore Holly,” Robert Howard was a fighter. From humble beginnings — a boy dominated by his disciplinarian stepfather but fueled by an unquenchable passion for pro wrestling — Bob grew up struggling to make ends meet.

As an adult with a family of his own to provide for, Bob fought in bars for money before finally following his dream of wrestling. From regional promotions all the way to the bright lights of the WWF, from false starts as Thurman “Sparky” Plugg and “Bombastic” Bob to fame as an internationally known superstar, The Hardcore Truth tells the story of Bob’s life including his 16 years working for Vince McMahon.

In this rollercoaster tale of success and frustration, replete with missed opportunities, broken promises, and a broken neck — a story of fast bikes and faster cars, lost loves and wrestling bears, bar fights and betrayal — Bob shares his uncompromised views on the present wrestling landscape with fascinating insights into the world leader in sports entertainment.

Bob Holly has always been known as one of the toughest SOB's to grace the square circle and this is where he tells his story.

Holly really gives a fascinating look in to his career and with some caustic opinions of some of the people that he has worked with.  One of the things I have always liked about Holly is the fact that he's not afraid to speak his own mind and that is most definitely true here.  He doesn't mince his words in the slightest and  that's what makes this autobiography interesting.  Normally you would get a whitewashed look at a career and not a whole lot of personal opinions but ECW Press have worked hard with Holly to bring his story to the page.

The way Holly talks about his past is honest to the extreme and he doesn't hold anything back.  In all honesty, his past really does explain his general demeanor but at the same time, it was good to hear what he really thought of the people that made him in to who he is today.  Another thing I liked was the sheer honesty he shared about his career.  He wasn't afraid to say when he messed up and he wasn't afraid to say when he didn't agree with the decisions that people such as Vince McMahon made during his time in the WWE.

Also while Holly does come over as quite a gruff and cynical guy, he really does show a softer side to his personality.  It was a nice touch to see him show his emotions about his family and about his friends that helped him get in to wrestling as a career.  It's those moments in the book where he really does come across as humble and appreciative, the complete opposite of the opinion that a lot of people have of him.

All in all, this is a brutally honest look at an under rated wrestlers career written by the man himself.  He doesn't hold anything back and that makes a refreshing change to some of the stale 'play it safe' wrestling books that have come out recently.

Regardless of your opinion on Bob Holly, this is definitely a worthy addition to any wrestling fans library.

Posted by Pat Scattergood at 08:33