The Art of Bioshock Infinite Review 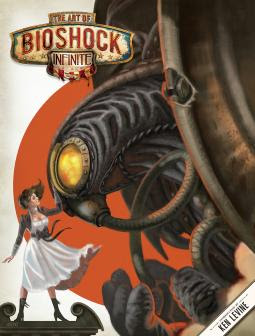 Edited By Philip R. Simon With An Introduction By Ken Levine

In The Art of BioShock Infinite, delve deeper into the city of Columbia—the fabled floating metropolis that serves as a beacon of technology and achievement for the early 1900s!

See the evolution of the Heavy Hitters, the populace of Columbia, the Sky-Hook, vigors, airships, and much more!

As both an art nerd and a computer game nerd, I have been reviewing some absolutely brilliant tie-in books about how certain games and movies etc started as mere ideas and storyboards and evolved in to the finished products that we've all seen today.

With this book, which is about the computer game 'Bioshock: Infinite', I was really excited to see how the sublime, beautiful and sometimes scary imagery used in the game itself came in to being.

This one didn't disappoint art wise.  The illustrations here are absolutely worth buying the book for alone.  They range from the beautiful cityscape pictures to concept drawings right up to some really grotesque drawings of enemies that could have been in the game.  There were some absolutely brilliant drawings of characters that I would have really liked to have seen included such as a really creepy magician, some of the early 'creatures' that then evolved in to the characters used and even the early drafts of mechanical watchmen that would watch over the floating city.

That theme of the mechanical meeting the flesh is an idea that runs throughout the game and this book as well, which is reflected in art that's been included here.  The art nouveau with a bit of the art deco look is honestly a thing of beauty.  You really can see some steampunk influences as well in the work and if you take your time reading this book and looking at the drawings you really do start to get a sense of just how many layers are involved here.

The only complaint that I have about this book is that while there is a ton of artwork and some sweet looking concept art, there's not a whole lot of writing to be found.  Instead they chose to use the writing to just further illustrate key points, which was fine for what it was but it left me wanting to know more about the ideas behind the art.  For example, there are some awesome looking characters that weren't used in the game but they don't really go in to why they weren't used or where the ideas for them came from.  That's a real shame because as good as the finished product was game wise, it's still always interesting to see just what didn't make it in and why.

Other than that small complaint, this is a brilliant book for the nerdy art lovers amongst us.  If you are a fan of the game itself, this is honestly an essential purchase for you.  If you are anything like me and like to see how things came in to being then, again, this is an essential purchase.  I'll admit that while it's not as good as the 'Art of Dead Space' book I reviewed a little while back, it's still an absolutely fantastic addition to any game and art fans library.

Posted by Pat Scattergood at 02:51