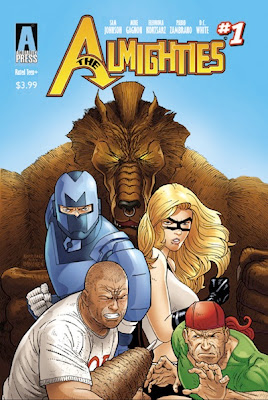 Brought together on a 'special day' (it was a Thursday) by the mysterious White Out to combat threats to America's security!

A superhero comedy is an incredibly hard thing to pull off with out it turning it turning in to something little more than groan inducing boredom.

Every now and then however someone comes along and gets it right.

In the case of the movies, we have had 'Defendor', 'Super' and many others but not so many in the comic book world so where does this release from Actuality Press fit in?

Well, I can honestly say that it's up there with the best of them.

A highly satirical and massively funny spoof of 'The Avengers' and of superhero teams in general, Sam Johnson and Mike Gagnon have managed to craft not only a hilarious story but one that gave me some of the most fun I've had in a long time reading a comic book.

The characters come to life brilliantly.  While the characters are most definitely spoofs of characters we all know and love but there is one that absolutely stands out for me.  Not only because he has some of  the funniest lines but is one of the most bizarre that I've seen.

Stefanos has no special powers to speak off.  Instead he is working three jobs, one at a takeaway, as well as being a member of the Almighties team.  He was absolutely fantastic and had me howling with laughter, especially with his catchphrase of 'Who wants salad?' when ever he goes in to battle.  He also has a rather unique weapon.  A meat skewer with the meat still attached!

As well  as all of that we have a robotic Hitler, an appearance by Barack Obama, a hero that stops in the middle of a battle to wonder if he should get checked for testicular problems and tons of other stuff that will have you both thinking 'did they just really say that' as well as howling with laughter.

All in all, this is definitely a title worth picking up.  It makes a welcome change from the death, violence and a myriad of other dark moments  in other comics.  Hilarious.  Well worth giving  this one a go.

So, after all of that, I have one question.