Star Wars: Book of Sith - Secrets of the Dark Side by Daniel Wallace Review 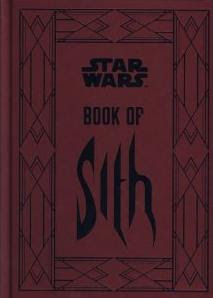 The Sith have existed in the galaxy for centuries, lurking, waiting for their chance to seize control. In his quest for domination, Darth Sidious tracked down five pivotal Sith texts written by his most powerful predecessors.

Then, drawing on the knowledge within the compiled pages, he wrote a sixth text.  His own manifesto.

Together, these documents shed light on the philosophy, achievements, and failures of the Sith Order.

I am a massive fan of Star Wars.  I've done the books, the television shows, the movies, the Lego sets, everything I can get my hands on I'm likely to get as soon as I can.  I honestly thought that by now they were surely running out of ideas for things to give to the fans.

Boy was I ever wrong?

This book by Daniel Wallace is absolutely spot on.  If you are a Star Wars fan then this is a treasure trove of information, illustrations and everything in between to grab your attention and keep it there.

Much like its Jedi counterpart, this book pretty much tells the history and formation of the Sith faith and doctrine that Darth Sidious followed and also changed to fit his own needs.

If that sounds something stale and boring, ignore that voice in the back of your head telling you that because this book is the complete opposite but there's so much to tell you about with this one so let's get started.

Firstly, let's talk about the paper.  Yes you read that right.  I love how they made it feel like an old parchment and how they cut the pages differently to show the different sections that were taken by Sidious to create his own manifesto.  It's the little touches like that which make this book feel like an absolute gift to the Star Wars fans out there.

The illustrations absolutely hooked me in.  They were all done in different styles and even down to the doodles in the book, all fitted together to create a cohesive story.  It's the same with the notations as well.  All of those were done in different handwriting styles as if each owner of the book had made their own separate notes about what they were reading.  It was almost as if no matter where your eyes went on to the page, there was something new to look at.  The two constant note makers are Sidious himself and Luke Skywalker, although there were different styles there as well offering little tidbits here and there.

The best part by far was the section on the 'Nightsisters', which then led to some really interesting parts about alchemy, spells and talismans of all sorts.  That, for me, really added a layer to the book and gave a new perspective.

As far as I am concerned, the only downside is that next to the sheer amount of information about the other parts of the Sith belief, there didn't really seem to be much about their unique combat style.  I think that was a real shame but with the rest of the superb information here, that can easily be forgiven.

If you are a Star Wars fan then this is an absolutely essential purchase.  In fact, if you are a fan then why haven't you got this already?