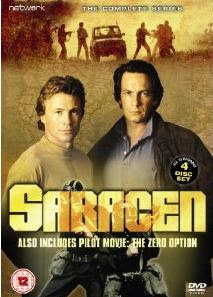 
Terrorism, kidnap, hijacking and espionage are the daily dangers faced by David Barber and Tom Duffy, chief operatives for Saracen Systems - a private security firm whose clients are governments, industry and individual contractors worldwide.
Their backgrounds and personalities are radically different: Barber, tall, dark and with typically English reserve, left the SAS when a mission went tragically wrong; the blond, rugged Duffy is a relaxed, ruthlessly charming American trained in the elite Delta Force. Their contradictory qualities make for a volatile friendship but a highly professional partnership. Under Saracen's founder and director, retired army officer Colonel Patrick Ansell, the agents take on high-risk tasks too sensitive or unpredictable for other agencies to handle.

Available on DVD for the first time, this release contains all thirteen episodes, originally screened in 1989, as well as the pilot movie from 1988, The Zero Option - an account of Barber's failed SAS mission and his subsequent recruitment by Saracen Systems.

Review
Nostalgia can do funny things to a persons mind. Sometimes you look back to your early years remembering that something was the best thing in the world and thought that it was amazing and without flaw. Then you revisit that very same thing years later and realize that it was actually a massive pile of crap.

That's what happened here. I have a few memories of catching the tale end of the Saracen television series when I was a young boy and absolutely loving it all while being enthralled by the tales of spies and blackmail. Using those memories alone I would have described it as 'Spooks' but 1980's style.

So imagine my delight when I found this set of the entire series AND the pilot movie 'The Zero Option' for next to nothing.

I rushed it home and stuck it in to my DVD player and waited to be enthralled and amazed by spies, death, intrigue and double crosses.

What I actually saw was a big steaming pile of crap. Wooden acting, badly written episodes and some massive plot holes. The only good thing about this set were the stunts but even then that couldn't stop me from feeling disappointed and worst of all, bored stiff, during the show.

While in a normal set a movie length pilot as a special feature would be an exciting prospect. However when it's as dire as this one, although still a slight improvement on the series, I would rather have given it a miss.