Quite Contrary by Richard Roberts Review 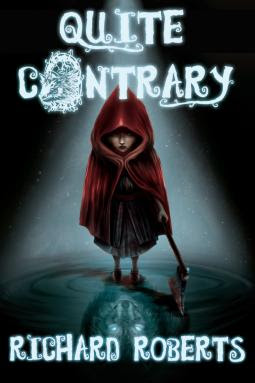 
The secret of having an adventure is getting lost. Who ever visited an enchanted kingdom or fell into a fairy tale without wandering into the woods first?

Well, Mary is lost. Mary is lost in the story of Little Red Riding Hood, and that is a cruel and murderous story. She’s put on the red hood and met the Wolf. When she gives in to her Wolf’s temptations, she will die. That’s how the story goes, after all.

Forget the Wolf’s temptations, forget the advice of the talking rat trying to save her – she will kick her way through every myth and fairy tale ever told until she finds a way to get out of this alive. Her own way, and no one else’s.

The synopsis for this novel  really had me intrigued with it's rather unique take on the land of fairy tales.  While it's an idea that has been done before, Roberts really does give it a unique spin.

One of the strengths of this novel is how he has written the characters.  Yes, he has taken well known fairy tale characters but they really aren't the ones you have grown to love from your childhood.  The best of these being an incredible creepy and rather smarmy version of the wolf from the 'Little Red Riding Hood' story.  The character just made your skin crawl the minute he appears in the story.

Another brilliant part of the novel is the inner monologue that goes through the main characters head.  She's not the normal stereotypical heroine that kicks ass but nor is she a meek 'oh please save' me style character either.  She's a grumpy, sometimes sullen young girl who is equal part cynical and brave along with moments of massive self doubt.  Roberts really has done a superb job of creating a character that is both fully fleshed out as well as feeling realistic, which for a fantasy novel is quite an achievement.

The one small complaint I had with the book is that there were moments that just didn't grip me and that meant the story sometimes went up and down quality wise a couple of times.  Those parts weren't terrible, far from it.  They were a lot better than some of the other fantasy novels I have read recently but with the good parts being so good, they just fell a little flat when compared.

All in all this is a very good novel for fantasy lovers out there.  Richard Roberts is definitely an author that I would read more books by.

Posted by Pat Scattergood at 08:29