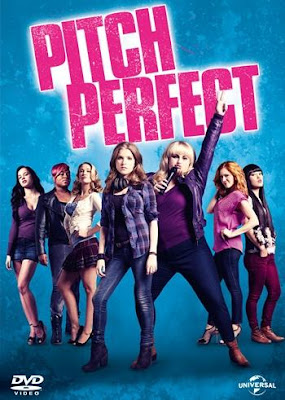 Beca, a freshman at Barden University, is cajoled into joining The Bellas, her school's all-girls singing group. Injecting some much needed energy into their repertoire, The Bellas take on their male rivals in a campus competition.

After the success of 'Glee', there were an absolute glut of movies about glee clubs, singing clubs, choirs and pretty much every other type of singing club there could be.  In fact, it got to the point of complete overkill so when this movie came out, I was a bit hesitant to watch it.

While the trailer looked good, it didn't exactly make me want to rush out to see it.

However, once I sat down with my fiance to watch it I actually found myself really enjoying it.

The story is pretty much a 'by the numbers' type of movie that is so prevalent in this style of movie.  You have a group of people that don't get on with one another, there's the normal love story of they don't like each then they do then you wonder if they will get together after all.  So it's not exactly inspired.

But don't give up on the movie yet.  This is most definitely a case of the performances raising what is quite a safe script in to a movie worth watching.

Anna Kendrick gives a good showing as Beca.  Normally that would be a  quite cliched character but she manages to put her own spin on her and that really makes the character a hell of a lot more interesting.  For once, it was quite a nice change to see a movie where the character doesn't have to make a complete character change to get a person to like her.  Instead Beca stays the opinionated character that she starts out as, she just becomes a little more trusting and that works really well.

The rest of the cast are absolutely hilarious and there are some absolutely brilliant cameo appearances throughout the movie.  Donald Faison, Turk in 'Scrubs', gives a small but very funny appearance as a member of an all male singing group.  Elizabeth Banks, in a minor role not a cameo, had me in hysterics as one of the commentators at the competitions.  Her bitter and cynical comments had me howling with laughter a hell of a lot of times.

How ever, this is most definitely a movie that belongs to Rebel Wilson as Fat Amy.  She gets the best lines and she takes the ball and runs with as the saying goes.  I hadn't heard of her before seeing her in this movie but I'll definitely be checking out more of her stuff as she was by far the funniest part of the movie, especially in the training scenes.

I was a bit disappointed that there were no special features in all honesty.  I would have loved to have seen a behind the scenes about how they performed the incredibly varied songs or even about how they chose the cast but alas, obviously not to be.

All in all, while the script isn't exactly world breaking, it was still very funny and a hell of a lot better than I was expecting it to be.  This was definitely Rebel Wilson's movie, she's worth watching the movie for in fact.  The lack of special features does hurt the disc a bit but that's a minor complaint.