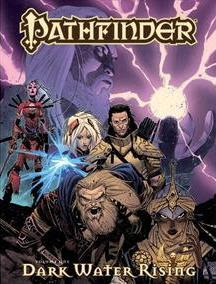 Valeros the warrior can rely on his sword arm and his friends — the mysterious and beautiful sorcerer Seoni, the quick-witted elven rogue Merisiel, knowledgeable and powerful wizard Ezren, the well-traveled dwarven ranger Harsk, and courageous cleric Kyra — but nothing can prepare him for the dangers that lurk ahead.

The scattered and chaotic goblin tribes of Varisia are changing, growing in power, and unifying in ways no one has ever seen before. At the heart of this strange evolution is an ancient evil force looking to establish itself anew in the world of Golarion.

This beautiful, oversized hardcover collects the first six issues of the comic series and includes more than 30 pages of encounters, characters, and world detail for the Pathfinder Roleplaying Game, including a brand-new poster map of the region explored in the Pathfinder comic!

I have to admit that I don't have a whole load of experience with table top games or 'Dungeons and Dragons' etc so  I was a bit hesitant with this release.  I was thinking that maybe it would go over my head or I'd feel like I'd missed something.

That's not the case.

'Pathfinder' isn't a bad graphic novel.  It looks relatively well drawn, although it's not the best art I've ever seen, but for some reason I just couldn't get in to it and, if I'm being completely honest here, I got quite bored in places reading it.

The problem is with the characters.  Even with my limited experience of the role playing scene, I still found the characters to be incredibly cliched and of a 'been there done that' kind of style.  I would even go so far as to say that if you have ever read a fantasy book or seen a fantasy movie then you've probably seen versions of these characters a hundred times before.

Don't get me wrong, the writing itself is exciting and fast paced but it's the characters that let it down.  I would have enjoyed the story a hell of a lot more if they had taken more of a risk with the characters themselves.

Art wise, the book looks good but it's a case of style over substance.  One of the things I did notice however was that when there was a busy action scene, the art seemed to lose some of it's detail and that's a shame because it's during the battle that you need the little details to draw your eye to the action.

All in all, I have to admit that I wasn't a fan of this release at all.  However, there was a silver lining to the release.  There are loads of tie in bits so that you can use your characters in your role play games as well as loads of stuff to use in the 'Pathfinder' game itself.

As a massive fan of Dynamite Comics, I had high hopes for this one but hey, can't win them all.