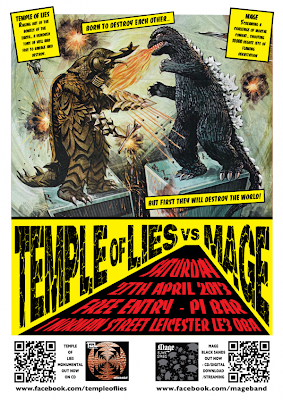 The ultimate double headline face off!  Mage collide with Temple of Lies but who will survive the onslaught!

In this double headline gig, we were treated to not one but two headliners in the shape of the bands Mage and Temple of Lies.

First up was Mage.  A band with a good sound that sounded like a bit of a mix of stoner rock meets Metallica via a bit of Megadeth.  Their set was well filled with some very good songs but sadly the sound let their performance down a little bit.

The bass was up incredibly loud but even though it made the bass sound incredible, it tended to drown out the singer in a few places and that's a real shame because he has a fantastic voice.

That said however, Mage really did have a great presence to them while on the stage.  They're not a 'jump up and down' style band, instead letting their music do the talking for them.  When the music is as good as theirs, that's a great approach to have.  With Mage, you know what you are going to get.  Some loud and heavy rock with intelligent lyrics. 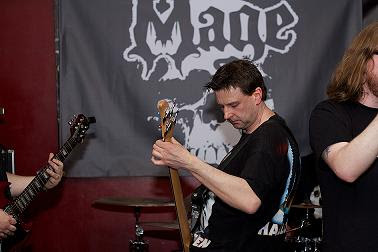 Other than the minor sound problem, their performance was a really polished one with some great songs.  I would definitely go and see them again but hopefully with the sound a little better.

Next up was the band Temple of Lies.  I have to admit that while I'd had people recommend them to me, I'd never actually heard them play before.

Temple of Lies are one of those bands that can best be described by using the word varied.  They don't seem to stick to any one particular style.  Instead they seemingly take all the bits they like from other genres and mix them all up to create their songs.

Their songs have a really great heavy sound combined with a 'Stuck Mojo' style funk running just under the surface.  This is definitely underpinned by the superb guitar work by John Scranney and the bass by Simon Mitchell.

One of the major strong points of the band was the 'Sepultura-esque' drumming by James Sereda-Barsby.  At times his drumming had a funk style feel and other times a raw tribal one.  But I have to admit that it was one member that truly turned me in to a fan. 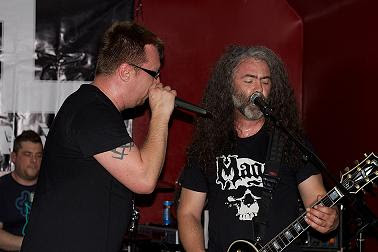 The front man, Simon Shaw, has a massive stage presence to him.  In fact, I would even go so far as to say that at times he had fans eating out of the palm of his hand.  If there were any people in the crowd that weren't fans of Temple of Lies before, I'm sure that this performance would have won them over.  At one point Shaw was walking through the crowd, went to the bar, grabbed a drink then came back without missing a beat.

All in all, this was an absolutely great night.  Two very good bands, although the strength of Mage's songs were slightly lost by the bass sound drowning out the singer every now and then.  On this night I'd definitely have to give Temple of Lies the edge though but both bands are well worth checking out, especially in a live setting.

For more information on Temple of Lies click here!

For more information on Mage click here!
Posted by Pat Scattergood at 01:54