King of the Travellers Pre-Release Review 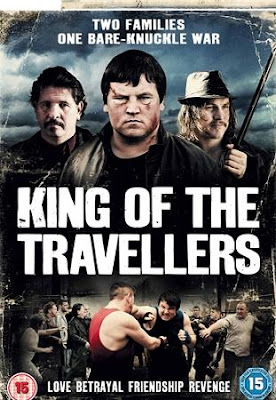 Written and Directed By Mark O'Connor

Irish drama in which a young man's quest to avenge his father's murder is complicated when he falls in love. John Paul Moorehouse (John Connors) was only a boy when his father was killed. 12 years later he is a member of an Irish travelling community and believes he is closing in on the identity of the man who took his father's life. However, his love for Winnie Power (Carla McGlynn) threatens to turn his quest on its head when he discovers that she is the daughter of his prime suspect...

The cover for this release makes it look like it's little more than a movie about traveller families belting the hell out of one another in bare knuckle fights but this movie is much more than that.

In fact, I would even go so far as to say that it is one of the best movies I have ever seen about the travelling community full stop.

One of the things that I really liked about the movie is the fact that a lot of the scenes really feel authentic, almost as if they have come out of a documentary about their way of life.  That is down to a brilliantly simple but effective movie by the director, Mark O'Connor.  As well as actors, the cast is also made up of real life travellers and I honestly think that helped to keep the movie with an authentic air instead being a melodramatic attempt at recreating their lives.

Another good move is the fact that they use traditional Irish and traveller songs instead of resorting to whatever songs are popular at the time.  This really helped with the atmosphere of the movie and, in my experience, really drew me in to what was going on during the movie.

The quick, sharp directing style of Mark O'Connor is tempered with some really subtle and slow moving moments as well, which allows for the growth of the characters.  There are also some very shocking moments but the characters have been built up so well that you really feel for them whenever anything happens to any of them.

The love story between the two main characters is very well done and doesn't once  fall in to melodrama.  While some have described it as a lesser man's 'Romeo and Juliet', I think that is incredibly unfair.  It's the story of two young travellers who want nothing more complicated than to be left to be in love with one another and be left alone yet circumstances seem determined to not allow that  to happen.

Cast wise, the movie is packed with some brilliant performances.  The best of these by far is John Connors as John Paul.  He gives both a sympathetic and powerful  performance that is so effective that I couldn't take my eyes off of him whenever he was in a scene.  I would definitely watch another movie with him in just to see how good he can be in another environment.

All in all, this was an effective, well shot and well acted drama about life as a traveller but it doesn't just stay as that, in fact the movie itself has a very strong message about how violence can breed violence no matter how justified you may feel in wanting to retaliate, which can sometimes lead to very tragic circumstances.

'King of the Travellers' is out to buy now

Posted by Pat Scattergood at 13:26