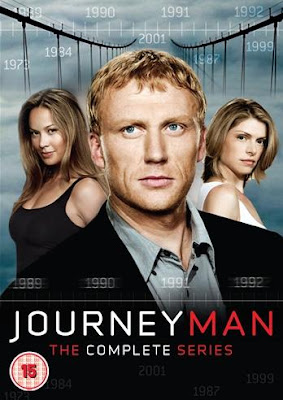 I wasn't able to catch this when it was shown on television but had heard many good things about it  so when it was finally released on to DVD after 6 years, I was quite eager to get it.

It most definitely didn't disappoint.

The comparisons between this and 'Quantum Leap', while understandable to a small degree are a bit on the harsh side.  OK, both involved someone time traveling and then helping someone but to me, that's where the comparisons end really.

This one has a great and at times complex story but at the middle of it is a heart that gives the show it's emotional edge.  It's that edge which raises the quality much higher than it could have been.

However smart the writing is, and in this case it's both fast paced and character driven, that would all fall down if not for a good cast.  That's something this series has in spades.  Each actor and actress really gives it their all to make each character unique and memorable.

Out of all of these, the show most definitely belongs to Kevin McKidd as Dan Vasser.  He completely owns the scenes when ever he appears and plays the part superbly.  I loved the subtle nuances of the character, his motives, his desires and how McKidd played him as equal parts wanting to do the right thing and thinking that he was losing his mind.  He managed this in a beautifully subtle nature and without falling in to melodrama that you really couldn't help but get behind him as the series progressed.

The special features here are just flat out brilliant.  I especially loved the feature where the cast and crew spoke about their plans for series if it had gone past the first season.  Some of those ideas were brilliant and I would have loved to have seen them put in to action.

It's a real shame that this series only got one season as it was really picking up steam when it got cancelled.  That happens to a lot of television shows 'Tru Calling', 'Firefly', 'A Gfted Man' to name a few.  All cancelled just as they were finding their feet.

This DVD set is most definitely worth getting.  If you are a fan of 'Quantum Leap' or 'Tru Calling' or just a fan of intelligent and dramatic science fiction then you will love this character driven show.  I do think the 'Quantum Leap' comparisons are a little unfair but at the same time I think you will like this show if you liked 'Leap' so give it a go, you may surprise yourself.