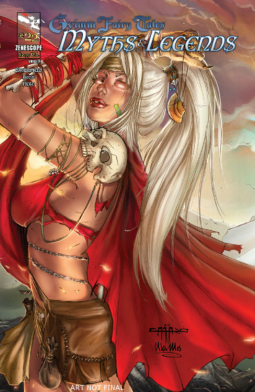 Baba Yaga and her fellow villains have gathered together the long-lost pieces of the Sunstone of Ra with plans of unleashing an ancient and powerful highborn, Helios, against their enemies and the rest of the world.

The guardian's of the nexus, Samantha, Sela and their fellow falsebloods-in-training must join forces against a highborn that not even their combined powers may be a match for!

Beast versus Erica. Brittany versus Morrigan.

The Dark One versus Baba Yaga.

With an ending that you have to see to believe!

Featuring the long-awaited return of one of the most popular characters from the Grimm Universe, this trade paperback culminates over two years worth of stories that have all lead to this moment. The evolution of the Grimm Universe is here and nothing will be the same!

The Gathering and The Summoning are collected here for the first time in the final story arc of the bestselling Myths and Legends series. Collects Grimm Fairy Tales:

I've always been a massive fan of the Grimm Fairy Tales and when they were turned in to a series of comic books, I was eager to read them.  For the most part, they were really well written and drawn with the characters feeling both fantastical yet realistic at the same time.

I never thought that I would pick up one of the titles and not only be disappointed by it but find it a hard job to read all the way through to the end.

Firstly, it was most definitely the art work that really disappointed me to begin with.  It was nowhere near the quality of the earlier stories.  In fact, and I don't use the world very often, it was very poor.  The best way to describe it would  be that it feels rough and unfinished.

As  for the story, I found it bland and uninspired.  The rest of the issues had been working up to Baba Yaga's plan but yet now it's entering fruition, it seemed so stale and anti climactic.  I did like some of the back ground story lines running next to the main one but there just seemed like there was something missing from this one.  Maybe that's because the rest have been a superb blend of the legends themselves  and action packed interpretations.

The only part I enjoyed was what they did with Venus and the fact that Sela finally got to kick some butt was pretty cool but not enough for this one to not be a disappointment.

Posted by Pat Scattergood at 15:01