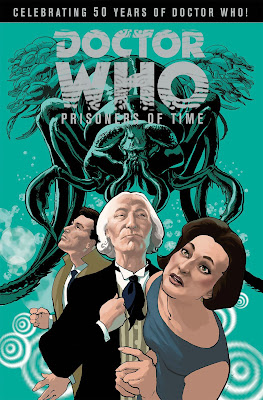 That day saw the broadcast debut of Doctor Who, which was to become the longest-running science fiction series on television.

And now, 50 years later, we pay tribute to one of the greatest pop-culture heroes of all time with this special series, which tells an epic adventure featuring all 11 incarnations of the intrepid traveler through time and space known simply as... the Doctor.

With the 50th anniversary of the long running television show 'Doctor Who' coming up, there is going to no doubt be an absolute bombardment of tie-in and merchandise for the fans both new and old.

This collection of comic book stories is one of those tie-in titles.  'Prisoners of Time' is a series that will eventually feature stories featuring all the Doctor's while tying in to one big story.  This, the first volume, features adventures for the first three Doctors.

The stories themselves really do have a classic 'Who' feel to them and rightfully so.  They feature the first three Doctors played by William Hartnell, Patrick Troughton and, my personal favourite, Jon Pertwee.  The writers of the stories have done an absolutely brilliant job of making their portrayals of those Doctors sound like their legendary real life counterparts.  The best of these is by far their attempt at recreating the Jon Pertwee era.

Another really good thing the writers have done is not go the cliched route of having the biggest villains pop in to the stories such as the Daleks or Cybermen to use an example.  Instead we have Ice Warriors, who for once aren't the bad guys, the Animus and Zarbi for the first story and that's just the tip of the ice berg.

The art is superb and really keeps in with the 'Doctor Who' comic book strips that we have all grown to know and love.  In fact, the art really looks as though it's come straight out of the time periods of the first three Doctors.  Much like the stories that I mentioned before, the art is the best in the Jon Pertwee story.  They've gotten the mannerisms and the little details so right that the story itself wouldn't be out of place in a live action Pertwee adventure.

The only complaint about these series is due to the first story.  While I loved the addition of the Animus and the Zarbi, relative newcomers to the 'Who' universe may be a little lost with the links and nods to the original stories that are peppered throughout the story without any explanation.  That's a minor flaw though.

All in all, this first volume is absolutely superb and well worth picking up.  I would even go so far as to say that it's an essential purchase for fans out there.

'Prisoners of Time: Volume 1' is out to buy on June 4th