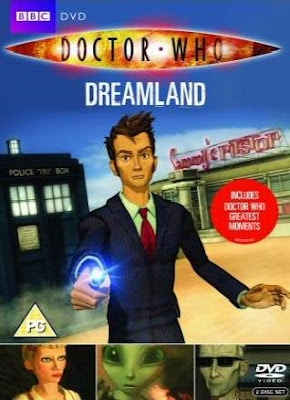 
Doctor Who - Dreamland sees the iconic TARDIS touch down in the desert in the USA. Stumbling across a mysterious alien artefact in a local diner, the Doctor (David Tennant) is led to Area 51, also known as Dreamland, the US' most secret base.

He then finds himself on a momentous mission to rescue Rivesh Mantilax from the threat of the ruthless Viperox and the clutches of the American military.

Review
This was shown officially on the Dr Who website starting with a 12 minute debut episode followed by 5 6 minute parts. Also it’s the 2nd animated spin off from the main television series. The first was ‘Infinite Quest’, also starring the tenth incarnation of the Doctor, played by David Tennant. The storyline could definitely stand alongside the live action episodes. The animation is a little blocky yet still somehow manages to impress due to the strength of the voice acting and the story itself. Dealing with kidnap, genocide and cover ups, this story manages to stay interesting for both adults and children alike while never being too heavy handed. That is very commendable.

The picture transfer for this release is very good yet it’s the animation that lets it down. Because of the blocky style of animation, the transfer shows up the flaws a bit more.

The sound however is fantastic. The explosions, the TARDIS appearance sounds, the alien voices, everything sounds so crisp. Overall, a job well done sound wise.

Released as a two disc set, the other disc having all three full length episodes of Doctor Who - Greatest Moments as a stand alone feature. These definitely make this a must buy on its own. The major letdown however is the distinct lack of extras on the Dreamland disc. No making of, no interviews, nothing. That really brings the score down.

A definite must see for any Doctor Who fan as the brilliantly engaging story makes up for the stiff and quite basic animation. It’s only the lack of extras on the first disc that really let it down as I feel, as a Doctor Who fan myself, seeing how they created this amazing story would have been brilliant.