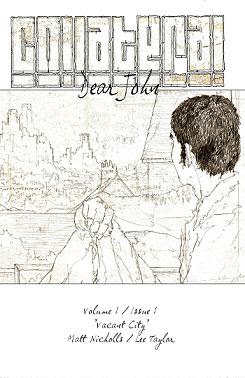 The focus of this drama is set around a typical family trying to survive their world.

Nobody ever thinks of the damage that is left behind and has to be re-built. Not just physical damage; emotional too. Collateral.

'Collateral - Dear John' is a rather unique comic book to review.  It does involve superheroes yes but it's not a superhero story per se.

What actually happens is a rather sharp, intelligent look at what exactly happens after those battles, after those heroics.  You never see the damage left behind not only to buildings and surroundings but to the people that live there as well.

This comic book series changes that.  The writing by Matt Nicholls is absolutely spot on on so many levels.  On one point you can look at this issue as a drama about a family struggling through their lives and trying to pick up the pieces after another superhero battle has destroyed the place where the father worked.  It also works as a psychological piece about peoples mindsets on how their lives are affected so much by situations beyond their control.  This also works as a look at how superhero stories don't always have a happy ending too.

You honestly can read this comic book on so many levels and that's why it works so well.  In fact, you can read this many times and notice new things each time.  While that is a very good style to write in, that's not even the biggest strength of the comic book.

That's by far the art work by Lee Taylor.  The stark lines and flashes of colour really make the art jump off the page and hook the reader in.  Another one of his major skills is Taylor's eye for detail.  Even the smallest detail like the movement of an eyebrow or a wrinkly on someone's brow is used in a majorly effective way.  The art is a bit like getting a gentle nudge in to doing something.  What I mean is the art is pushing you in to reading between the lines, in to looking at what exactly is happening to each character but it's doing it in a subtle yet haunting way so that it stays with you long after you have closed the comic.

All in all, this is an amazing comic book.  I went in to it intrigued by the storyline and came away wanting to read it again straight away.  That hasn't happened to me with a comic book for a long time and personally, I can't wait to read the second issue.

For more information on the comic book itself please click here
Posted by Pat Scattergood at 14:29