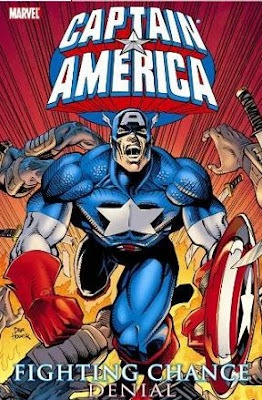 
Old soldiers never die - they just wear themselves out!

To Super-Patriot, Cap's a rival. To Americop, he's a relic. But newcomer vigilantes are the least of the Sentinel of Liberty's concerns when Cap learns his enhanced physique is shutting down on him!

His choice: retire from action - or die in it! But, while masterminds devise and dead villains rise, that's no choice at all for the Living Legend! Can Cap's friends dissuade him from setting the world's safety above his own?

Featuring Giant-Man, the Falcon, and the Black Widow!

The 'Fighting Chance' storyline in the Captain America universe appears to split fans straight down the middle. Some find it to be hokey and hate it whereas others call it a classic.

Personally I am in the second camp. The story here written by the late Mark Gruenwald is a fascinating look in to a different side of the Captain America character.

For a long time, I wasn't that interested in the character as I felt he suffered from the same problem that DC comics legend Superman suffered from. You never really felt that he would lose at any point.

That changes here with Gruenwald's look in to how Captain America would deal with the idea that the serum that created him was in fact the same thing that was slowly destroying him. That left the character with one of the hardest choices he would have to make during Gruenwald's run on the comic. Would he stay as Captain America, risking being paralyzed or worse or give it all up to live a normal life as Steve Rogers?

While some of the parts do come across as hokey in places, I didn't find it all that distracting. The writing is the same style that was so popular in the 90's and while it's not as realistic or hardcore as the Captain America stories of today but I still think that the more recent converts amongst us would still enjoy this story.

The artwork is definitely in the bright and brash 90's style but for me that's a bonus as it kind of feels like you are watching a Captain America cartoon unfold in front of your eyes, albeit one that deals with some heavy duty issues.

While it's true some of the criticisms pushed toward this tale are relatively true, neither do I think it's as bad as the detractors write it off as being. I found the whole story interesting and ended the release wanting to get the second book in the series. You can't really ask for more from a graphic novel can you?

Posted by Pat Scattergood at 14:49