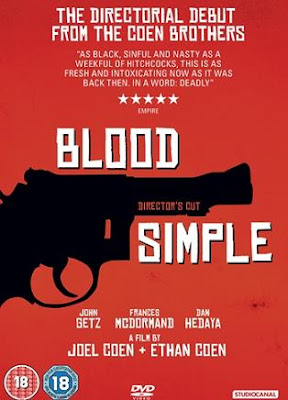 Written By Joel and Ethan Cohen
Directed By Joel Cohen

A rich but jealous man hires a private investigator to kill his cheating wife and her new man. But, when blood is involved, nothing is simple.

The Cohen Brothers are, in my opinion, a great directing and writing team.  It's very rare that you will end  up getting disappointed by one of their movies.  They have an eye for beautiful yet gritty scenes and for incisive dialogue.

This movie is no different.

The biting dialogue here makes  you want to shout at the characters on the screen but in a good way.  In fact, the portrayals that team with the brilliant dialogue really make the characters themselves come alive.

For the majority of the movie you are sat on the edge of your seat just watching everything unfold before your very eyes but feeling like you are part of the proceedings as well.  It takes a very good writer and director to make a movie watcher feel like that and that's exactly who we have here.

Story wise this movie has a bit of everything for everybody.  There's a film noir style to the movie that makes it seem like a movie that would have come from the era of such people as Humphrey Bogart  yet at the same time it stills modern to the core.

Another thing I liked was the cast.  The Cohen's always have a fantastic head for not only choosing a good to great cast but for choosing the right people for the right parts and that's the cast here.  Long time collaborator Frances McDormand is absolutely fantastic as Abby, playing the part as equally sympathetic yet at the same time with a hard edge to the character.  However, this is by far the amazing M. Emmet Walsh's movie.  Every moment in the movie that he was on the screen for, he completely owned the movie.

The only thing I didn't like about this release was the absolute lack of special features.  As this is a director's cut in which moments have been taken out, new scenes put in and the run time trimmed slightly, it would have been brilliant to see why certain moments were added or taken out yet all we have here is a trailer.  I would have loved to have seen why they made the choices they did but with a movie this good, you can't really complain too much about the lack of extra bits and bobs.

Posted by Pat Scattergood at 23:16