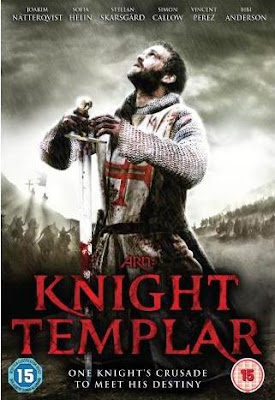 
In this lavish historical epic - set in the Middle Ages - Arn, the knightly son of a Swedish nobleman, must journey to the Holy Land on horseback as a sentence for falling in love with a forbidden romantic partner, Cecilia, who in turn, is banished to spend the rest of her days in a convent.

The harsh voyage carries Arn through the heart of the medieval world and into the core of brutal and bloody Crusades.

Both he and Cecilia must learn to fight to survive, to confront evil and overcome tremendous suffering and misery, guided by the faith that one day they will be reunited. Arn returns home to fight for his love and his life's mission: to unite Sweden into one kingdom.

With an esteemed all-star cast, this epic adventure blends thrilling factual and fictional characters to offer up brave knights, powerful queens and treacherous kings in a tale of war, intrigue, friendship and betrayal.

That's not a complaint however. This movie is absolutely spot on and very well made. The acting is absolutely top notch from top to bottom. Simon Callow is absolutely superb as always even though it's not a massive part, his screen time is highly memorable.

However this is definitely Joakim Natterqvist's movie. He gives an amazing performance as Arn. In a brilliant move, he's not a flawless hero instead he has guilt, doubts and still manages to be heroic to the core. It kind of reminded me a little bit of Kingdom of Heaven and Braveheart in the way that they played the heroes of those too. I couldn't take my eyes off of him every time he was on the screen and will be looking for more of his movies.

One of the complaints I've read about this movie is that there weren't enough battle scenes. I highly disagree with that. There are just enough battle scenes and the ones that are there are incredibly well done. Action packed and in a nice surprise, easy to follow. But that's not really what the movie is about. It's more about Arn's journey and love affair. That's the true heart of the movie.

The special features here are only a behind the scenes featurette but it's a very interesting for what it is, hence the 3 score.