An Interview With Bitter Ruin 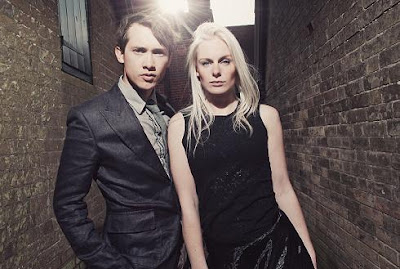 We here at Curiosity of a Social Misfit are pleased to welcome Bitter Ruin, who have kindly popped in to have a chat with Patrick Challis and Ashley Scattergood about their career and their Kickstarter campaign to fund their forthcoming album.

PC: You guys have a unique sound and style to how you perform and how you write your songs.  How did the band come about?

BR: We met at music school in Brighton and initially went about forming a rock band. The first song we ever tried together was a Queen Adreena track. However, as we developed our sound we were in the throws of a music history and business degree which I think made us much more experimental with genres, we're both classically trained as well and I'm guessing that the 'drama' comes from this. So although we still work with a variety of other musicians, the core of the band naturally remained acoustic which meant that we had to find an orchestral sound from very few instruments. Five years later and we still can't tell you what genre we are!
PC: Bitter Ruin are known as a band that tours as much as is possible.  Do you have any tour stories you want to share with our readers?
BR: Geez! Where to start? Every single day on tour is a story! - I guess the most recent one is that we are certain we were all visited by ghosts in Lincoln Travelodge!
PC: If someone is unfamiliar with your sound, how would you describe yourselves especially after being described as unique by so many reviewers?
BR: We hate this question and obviously we get asked it all the time. We generally avoid the question by telling people we work in IT…but let's try, LOUD, DRAMATIC, EMOTIONAL, INTERESTING, DARK?…ROCK, SOUL, FOLK, PUNK, CLASSICAL, MUSICAL THEATRE, FLAMENCO...maybe even a little POP too?


PC: Do you have a song that either of you are most proud of?
BR: Actually yes, all of them really, even the bad ones…they all tell a story and they're little bundles of art babies. Even the ugly ones need loving!


AS: You gained a lot of popularity after touring with Amanda Palmer.  Was touring with her a daunting prospect for you considering how vocal her fans are?
BR: Yes, we'd never really experienced that kind of connection with audiences before - although we've always been very comfortable playing intimate venues. I suppose we were just grateful to be given an opportunity to play in front of anyone, never mind such caring and enthusiastic people. Many people discovered our music on that tour and we still chat to them daily. I'd say it was a match made in heaven.


AS: You embarked on a Kickstarter campaign to fund a full length album but how did that come about?
BR: Last resort! Haha. Believe it or not we've always been on the fence about crowd funding. We think it's phenomenal in so many ways, but it does add a plethora of issues and we're also aware that not everyone can give. We toured in January and February to raise money for the album but when we started the budget we soon realised that we were falling short. It was a conversation that we had when we became stuck in our search for an affordable studio…"we could just do it at home?" - and so we would need to upgrade our equipment. We firm believers in doing things thoroughly and properly, so the whole project unravelled naturally from there…once we knew the budget it became obvious that we would need help but the benefit was that this equipment would be used again and again rather than spending funds on a one off studio session.
AS: Was using Kickstarter a hard decision to make after the opposition that was leveled at Amanda Palmer for doing the same?
BR: Amanda has admitted her mistake since the conflict about free musicians and if anything, I think we can all learn from that. At this point we would still work with Amanda for free and I think sometimes people forget that art is fun…but we TOTALLY see why there was an issue…being session musicians ourselves for years we have lots of experience with this. It was sad to see the backlash but in many ways it highlighted some very important issues and so I think its a good thing. The bottom line however is that Kickstarter funding doesn't last forever and at some point  the artist will need to ask again. THIS is something we are afraid of.
AS: How did it feel to reach your target amount so quickly thanks to the sheer generous nature of your fans?
BR: It was the last thing we were expecting. We genuinely thought that we'd be on about £3000 by now. We're bowled over! Completely. We feel all warm and fuzzy inside and we love love love you all for helping! - We won't waste this!
PC: What's next for Bitter Ruin?
BR: Making the album! We're going to dedicate our lives to this project for the next six months and work hard to create something brilliant. If we raise more than £30K we might consider a music video too.

PC: Thank you for taking the time to talk to us here at Curiosity of a Social Misfit.  Good luck with the new album!
For more information about this unique band please use these links
For their official site click here
For their Kickstarter campaign click here
'Trust' (Directed By Sian Fever)

Posted by Pat Scattergood at 13:28